Walking Down Memory Lane Into the Future

Debra Stiffler knew her old house well—it was the home her husband Mark’s grandparents purchased in 1946 and where he and his parents lived, and which Debra and Mark purchased in turn in 1974. While it was only around 800 square feet, it was a family home for generations, located near the University of Oregon’s south campus area. She and Mark moved to the country, and then to a 5-acre country property in Santa Clara, keeping the south campus house as a rental property. But, after Mark’s death a few years ago, the country property became too much.

“I knew immediately I didn’t want to stay in the country, because it was too much for me to take care of and I didn’t have warm, fuzzy feelings about it,” Stiffler says. “I started trying to figure out what I wanted, and I knew I wanted something that I could stay in and get old in, where I wouldn’t have to move again, and I wanted energy efficiency.”

Initially thinking she would remodel the old family home, her search led her to the website Houzz, where she was prompted to connect with a builder in the Eugene area. Dan Hill, an architect and builder at Arbor South, returned her message. 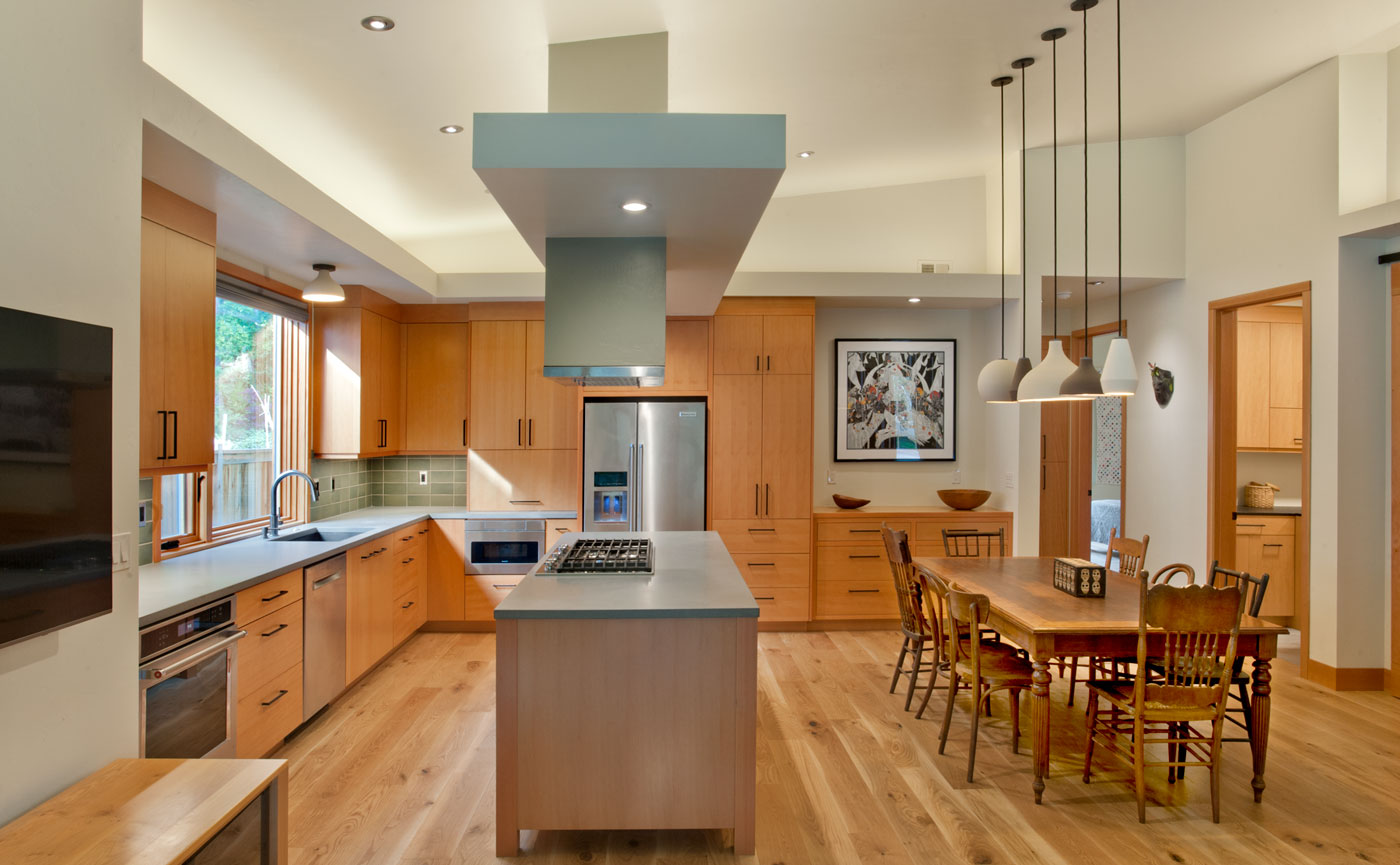 Hill could tell that this homeowner had a clear vision for what she wanted, and he also knew that her small house wouldn’t cooperate. “She was very open to starting over with the design of a new house,” he says, “which allowed us to embrace the idea of a contemporary home while still having warmth to it through the materials that we chose. This was a really good example of how to create a single-level, aging-in-place home in an existing neighborhood that’s up-to-date, but also compatible with the existing houses around it.”

Worried about disturbing the neighbors with the demolition and construction, Hill’s team talked to them, finding them favorable to the idea, and Stiffler herself was comfortable saying goodbye to the old house. Once the decision to rebuild was made, construction happened fast: She first talked to Hill in April 2017, and she moved in only a little more than a year later, in June 2018.

Her home in the country was more than 3,000 square feet with a 6,000-square-foot barn. It took two estate sales to sell everything when she finally moved, she says. Stiffler greatly edited her belongings and designed the new house with a sense of zen-like simplicity and ease. Now she gets compliments on the new house all the time.

“It’s perfect for one person,” Stiffler says. “Dan pretty much gave me everything I wanted. Dan’s first drawing pretty much hit it out of the park, and I couldn’t come up with anything to change.”

Stiffler was keenly familiar with the construction process through her late husband’s career as a builder. The new home is a comfortable 1,492 square feet, with a living room, two bedrooms, a large utility room, and a kitchen and dining area large enough for entertaining Stiffler’s brother and sister-in-law when they visit from Beaverton, as well as her three children and grandchildren.

As Stiffler looks around from the main room, with her 7-year-old golden Lab, Roxanne, at her feet, she sweeps her arms and says, “It’s all level; I can take the walker into the shower if I need to, which I hopefully won’t need to for a long time, but I’m not moving again.”

She knew she wanted a modern look with specific features, such as flat-front cabinets and dressers with no panels or other trim to get in the way of easy cleaning. Wooden floors throughout the home are beautiful white oak that clean up with just a sweep.

In the second bedroom, Stiffler added a Murphy bed so she can use the room for other things when there are no guests. Her office is in the main room, but it’s hardly noticeable behind an 8-foot-tall sliding barn door of clear vertical grain fir, which conceals it and also adds visual interest. Concrete countertops in the kitchen, installed by Bend concrete artisans Cement Elegance, include a 3-by-8-foot island that provides plenty of room for guests to gather around.

“I had seen concrete countertops previously, and I liked it because I was really tired of the ‘busy’ granite surfaces I was seeing all over,” Stiffler says. “Every one I saw was just so busy. In my last house I had black tiles, so I’m just not a ‘busy’ person.”

Sarah Ambrose of Sarah Elizabeth Design, who Hill often works with, helped Stiffler decide on some finishings, such as lighting and cabinet pulls. “She would show me things and I would tell her if I liked it or not,” says Stiffler. “Both her and Dan were very easy to work with.” 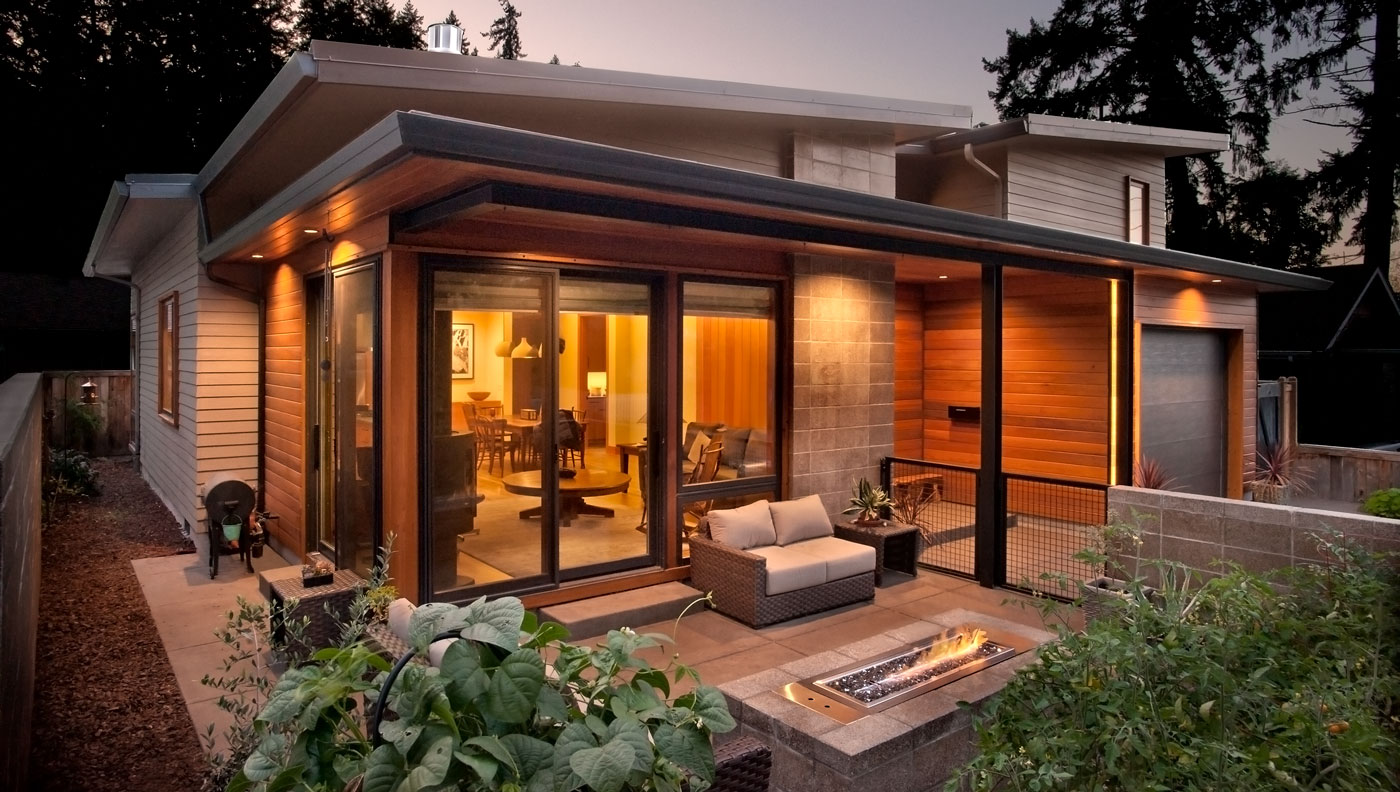 Stiffler’s home is economical thanks to a super energy-efficient envelope, according to Hill. This includes Energy Star appliances, low-flow toilets and faucets, ductless heating, and all-LED lighting. The house is set up for solar panels if Stiffler ever wants to install them, but it’s so energy efficient, she may not need to. She has a generator that will easily run things if the power ever goes out, and a gas fireplace that sits unobtrusively in the main room is one of the home’s main sources of heat. Despite the floor-to-ceiling windows in the main room, the heat stays put, because of the windows’ quality and their low U-value. A gas fire pit in a small front patio provides a cozy place to sit if she wants to enjoy a cool evening outdoors.

After spending 43 years in the country, with tractors, mud, lawn mowers, and wood heat, Stiffler welcomed having a lot less to maintain. “I was a caretaker for years and lived in the country,” she says. “I didn’t want that anymore; I wanted simple. There’s not a blade of grass in this yard.”

The yard is designed in a xeriscape style with low-maintenance plantings and minimal water needs. The back of the house is beautifully laid out as the storm water treatment and retention area. “Managing the flow of storm water and treating it is always an issue these days on newer projects,” Hill says.

The team was able to carve out a small rain garden area on the west side of the house. That was a challenge, but it works like a charm—the storm water is filtered, watering plants before it goes into a large pipe that runs on that same side of the property.

“This house served us for a long time, and it’s such a joy to me now to be in the same spot but in a house that really works for me,” Stiffler says. “And the neighborhood is amazing. People know each other. They invite you over and stop and talk to you when they walk by. I’m so grateful to be here.”