“Like going back to the womb.” That’s how some customers have described the experience of floating at Eugene’s only float tank facility, Float Om.

“Each experience can be different,” Float Om owner Ankush Vimawala says. “Each person is different. At the very least, it’s profoundly relaxing. On top of that, whatever bonus people get is different. Someone more spiritually inclined is looking for insights, or there’s the physical aspect of aches and pains.”

A float tank is filled with about 1,000 pounds of Epsom salts dissolved in 10 inches of water. The saltwater, heated to skin temperature, holds the body up. With all forces of gravity removed from the musculoskeletal and nervous system, and the light- and sound-proof tank, this experience can benefit your health, personal development, and spiritual life.

“More and more, we’re constantly distracted outside of the body,” Vimawala says. “There’s always at least one screen in front of us. Going into a float tank facility takes you away from the screen or distractions. It’s just you and darkness for 90 minutes.” 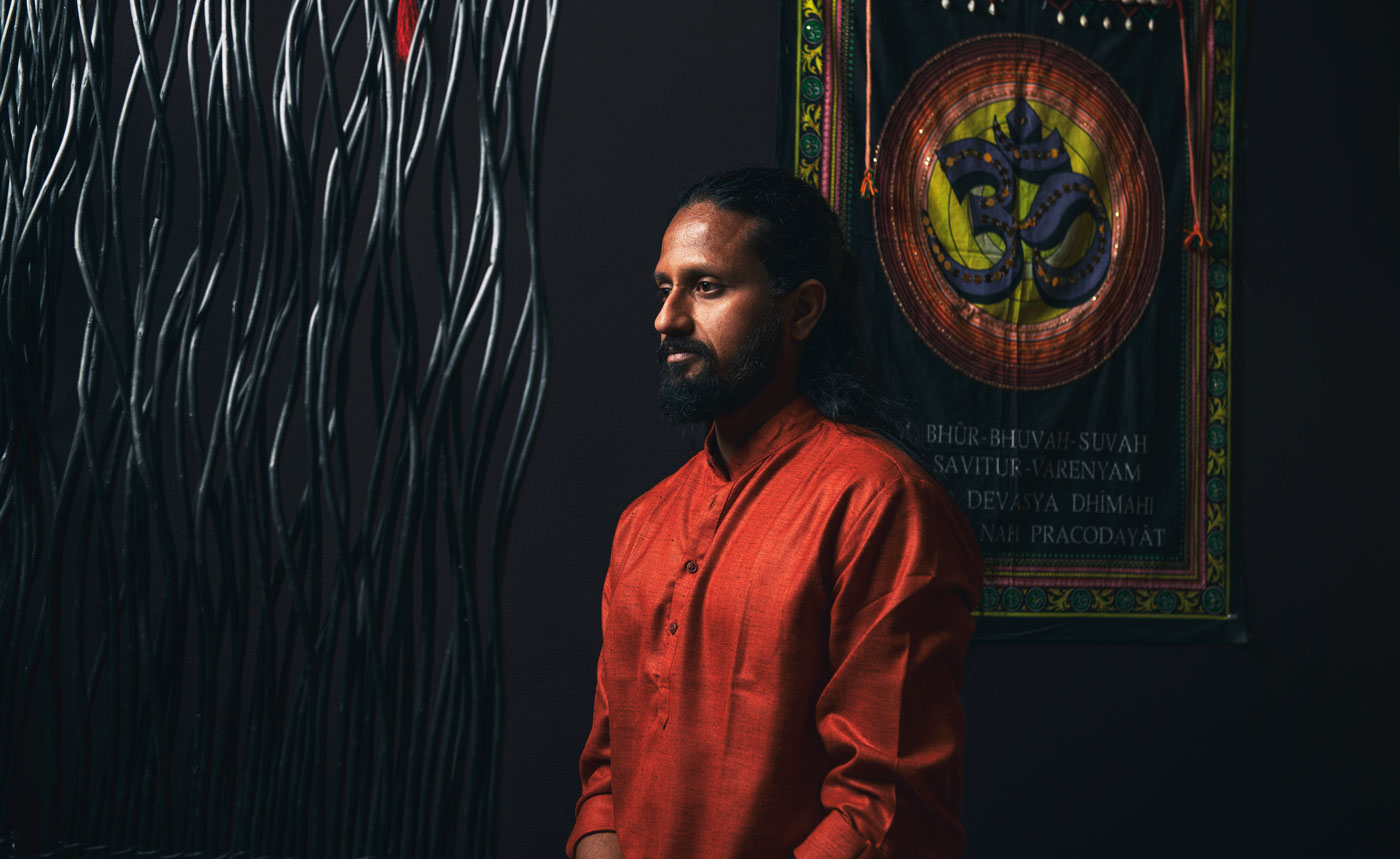 Vimawala established Float Om in 2012 after a series of events in his life. He was working as a software engineer, but was getting tired of being stuck in a cubicle. Corporate culture didn’t make sense to him and he wanted to have more freedom to pursue music (Vimawala has played tabla for more than 25 years and tours regularly). At the time, he was also studying Buddhist teachings, which emphasize the nature of sensory input and how that can be a distraction, and attending 10-day silent meditation retreats.

Vimawala first tried out float tanks in Portland and says the experience was “amazing and mind-blowing.” After a 90-minute float, he was having the same feelings he had on the third day of a meditation retreat. When he realized there weren’t any float tanks in Eugene, he felt like a lot of people here could benefit from access to floating.

“I always felt supported by people in Eugene,” he says. “Eugene appreciates the diversity of culture” and Eugeneans “are more open-minded to therapeutic [opportunities].”

Float Om offers two distinct styles of tanks. “The pod” is like a cocoon about 4 feet in diameter and 8- feet long. After hearing concerns about possible claustrophobia, Vimawala custom-built “the cabin,” which is about 7 feet tall, 8 feet long, and 5 feet wide.

“You can walk into it and stand up,” he says. “For first-time floaters, it seems less intimidating.” 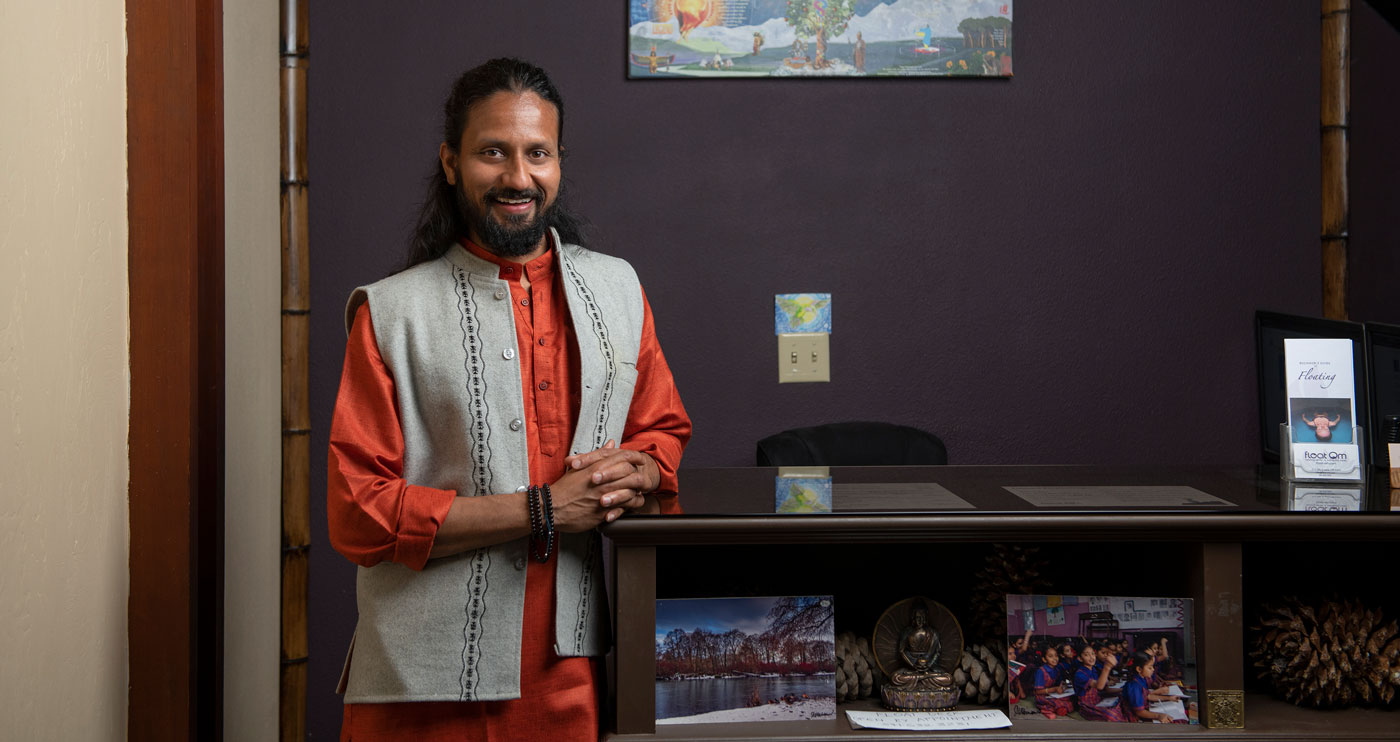 Although floatation therapy can help with pain management, musculoskeletal awareness, and chronic stress relief, it also has psychological benefits, Vimawala says. He has also had young veterans who suffer from post-traumatic stress disorder (PTSD) come in for therapy.

“One young vet mentioned that different faces would flash in front of him from inside the tank,” Vimawala says. “He was floating once a week and it was helping him process all that had happened to him.”

The tanks have also been used as an opportunity to mediate or practice introspection. Vimawala says a client came out of the tank and shared that she had met with her son, who had been dead for 10 years, and they had worked through some issues to come to a place of resolution.

To prepare for a float, don’t shave or wax, eat a light meal 90 minutes before, remove contact lenses, and don’t drink caffeine before. Float Om also has a meditation altar, which can be used before or after a float. Vimawala has been considering adding a salt cave as a complementary therapy.

Along with Float Om, Vimawala sells his photography from abroad and his own brand of essential oils, Mystic Scents. Vimawala works with a distillery in India and says he “enjoys playing with natural scents and oils that (clients) have never smelled or heard of.” He says the oils are traditional recipes passed down through generations.

Vimawala says everyone can benefit from floating. “Seeing people come out of the float tank and knowing that each person that leaves this place is better off than when they came in—that’s really satisfying,” he says. “I can see their face is softer and they’re relieved of stress. That feels amazing that I was able to facilitate them being more at ease with themselves.”

Sqrounds for All:
Alden’s delivers a taste of Oregon organic ice cream