Pedego Electric Bikes allows everyone to get back on the road

When Mike Murphy retired from his 42-year career in banking, he had planned to spend his retirement traveling around Portugal and New Zealand. But due to the COVID-19 pandemic, traveling wasn’t an option anymore. “I just happened to be walking by an electric bike spot, and I’d been an electric bike owner but I’d never owned a business before,” Murphy says. “It really came to me out of the blue. It wasn’t something I’d planned. But I went for it, and we opened Pedego Bikes on Nov. 5, 2020.”

Locally owned and operated by Murphy, Pedego Bikes offers a full line of electric bicycles to rent and buy, along with accessories and even cross-town tours.

Murphy says e-bikes are ideal for individuals who may be less inclined to ride a traditional bicycle due to declining health, hip or knee replacements, or chronic pain that wouldn’t allow for a traditional bike ride. Pedego Bikes specifically stocks the store with e-bike styles that are easy and safe to get on and off of.

“The mobility that e-bikes give people has been amazing,” Murphy says. “I have a number of people who are back on a bike for the first time in decades. We had a customer who had been a motorcycle racer and was in a pretty bad accident, so he hadn’t been on a bike since the mid-’80s. At first, he was hesitant to get back on a bike, but once he was, literally within a few seconds, he was laughing. And now he can go on bike rides with his wife.” 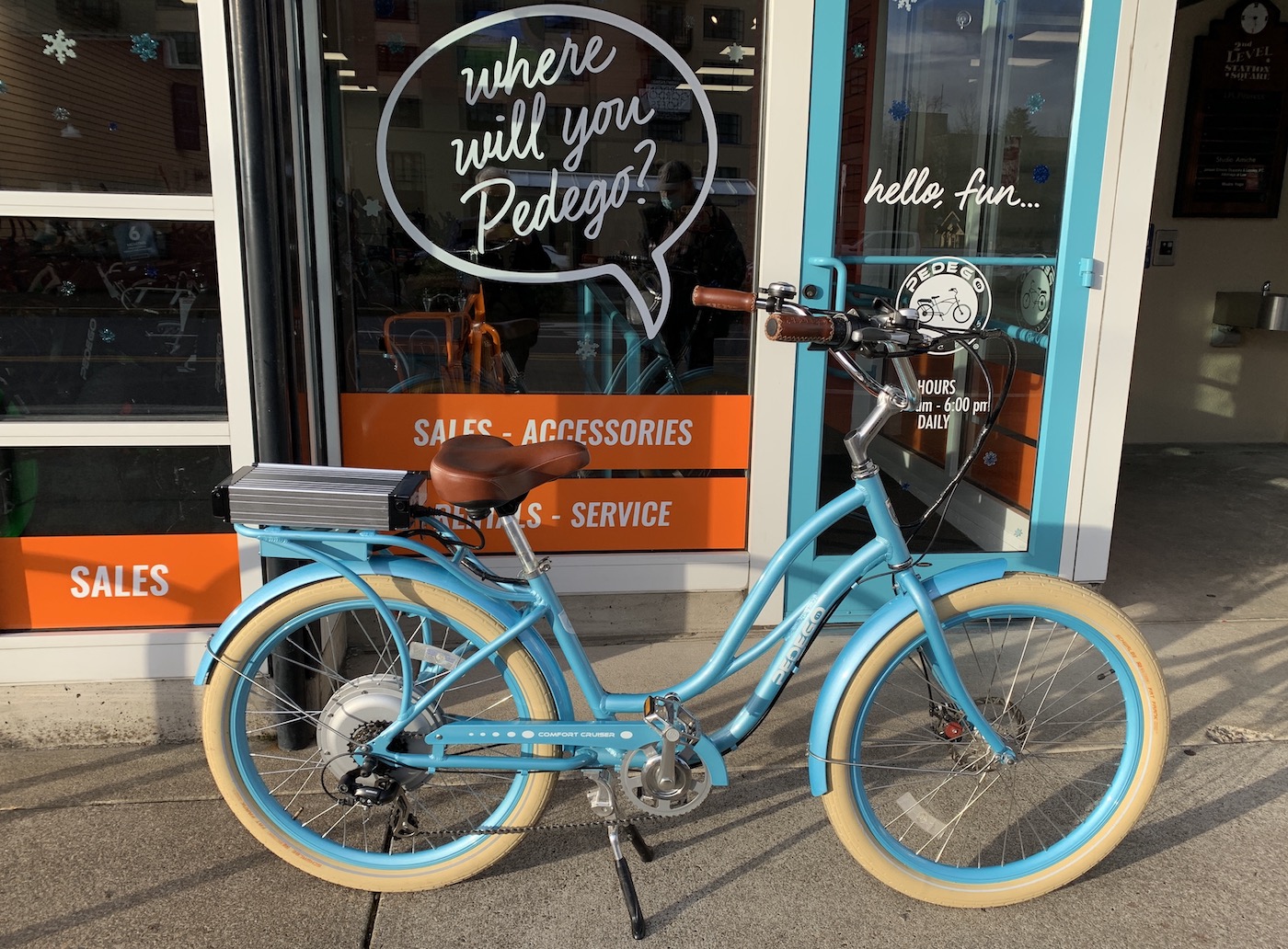 The main benefit of an e-bike is that it provides optional assistance to those who need it through a battery-powered pedal-assist or throttle system. Riders can pedal the bike similar to a traditional bicycle for as long as they want, but the battery allows for additional help when it’s needed. There’s also a safety factor, as a rider can accelerate quickly to avoid something on the road without having to rely on their own physical ability to pedal.

“The data shows that people who use an e-bike ride it four times more than a person who has a regular bike, because they can ride for 20 miles and they don’t feel all sweaty and sore and exhausted afterwards,” Murphy says. “And so they’re back outside riding the next day. I think the biggest benefit is that it gets people moving and it gets them outside.”

Pedego also offers an e-bike rental program, where visitors can choose single or tandem e-bikes to rent for two hours, a half day, or all day. They also offer local tours and organize a monthly event where Pedego e-bike owners and their family and friends ride together for a two-hour guided tour. The family and friends are loaned an e-bike for free to use for the event. Murphy said they are also building self-guided tours to roll out soon. 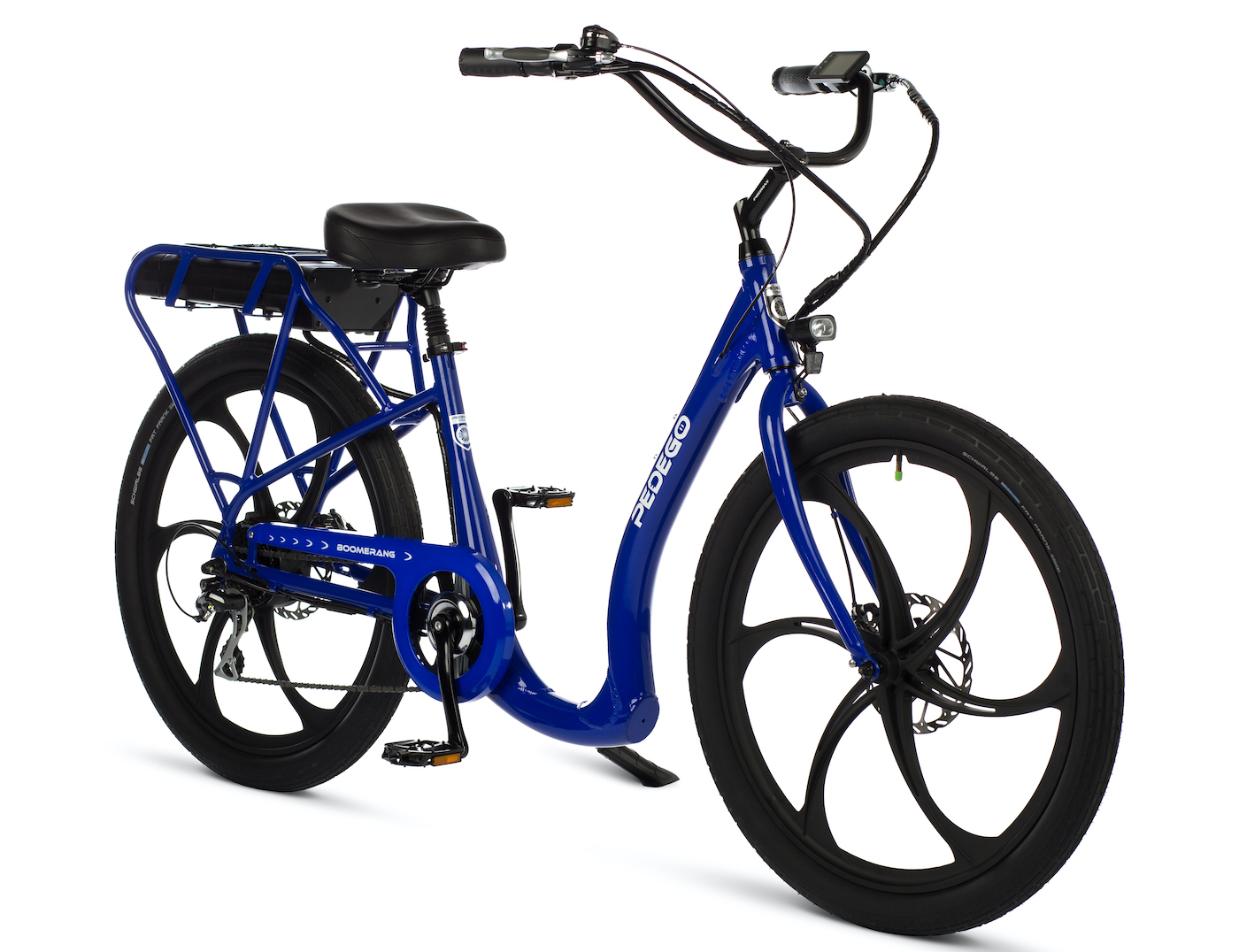 Those looking to purchase a Pedego bike will be able to test various e-bikes until they find the perfect one. The bike is simply plugged into a standard electrical outlet to charge, and most models can go between 30 to 60 miles on a full charge. The life of a Pedego e-bike battery is about five years, or up to 2,000 cycles for a daily rider, which is the length of the warranty offered for all Pedego e-bike batteries and electronic parts. For the afterlife of the e-bike batteries, Pedego uses the Lane County battery recycling program located at the Glenwood facility. Pedego services all their e-bikes in house and also offers an anti-theft warranty if a Pedego lock is also purchased.

“The Pedego brand is based around simplicity and comfort,” Murphy says. “From big, memory foam seats to the adjustable handlebars, we offer something for everyone. We’re passionate about e-bikes and there’s zero pressure. We want to ensure a customer is completely happy with their decision to purchase an e-bike, because it’s an investment.”

Pedego recently partnered with the city of Eugene for a workshop titled “Let’s Shift to Electric Mobility,” to educate the community on e-bikes and accessibility. Murphy says through this partnership with the city, Pedego plans to help Eugene be a bike-friendly and conscious community for current and future bikers. Pedego has also donated an e-bike to the Adaptive Recreational Services Department, which rents out bikes for free to individuals with mobility challenges.

“We want people to leave feeling comfortable, feeling empowered, and feeling safe,” Murphy says. “And if we do those things, then we’ve been successful at what we’re trying to accomplish here at the bike shop.”

Give the gift of Lane County this year with a subs