Eugene painter Chuck Roehrich’s interest in art started as a boy back in Newark, New Jersey. In grade school, he was asked to contribute a project to a class bulletin. “I drew a picture of a clipper ship,” he says. “I got all kinds of accolades.”

Roehrich’s father worked for Benjamin Moore Paint Co. as a manual color matcher, matching hundreds of gallons of paint color by eye. Some of Roehrich’s earliest paintings were done in oils brought home by his father from work, an effort to support his son’s overwhelming interest in painting.

“I would think about painting when I was in school,” Roehrich says, “and I would come home and that’s what I would do instead of doing my homework.”

An early painting by Roehrich is a stark, William Turner–like depiction of New Jersey’s Keansburg Pier, rendered in oil with broad and stormy strokes. “I passed by that view every single day,” Roehrich says. 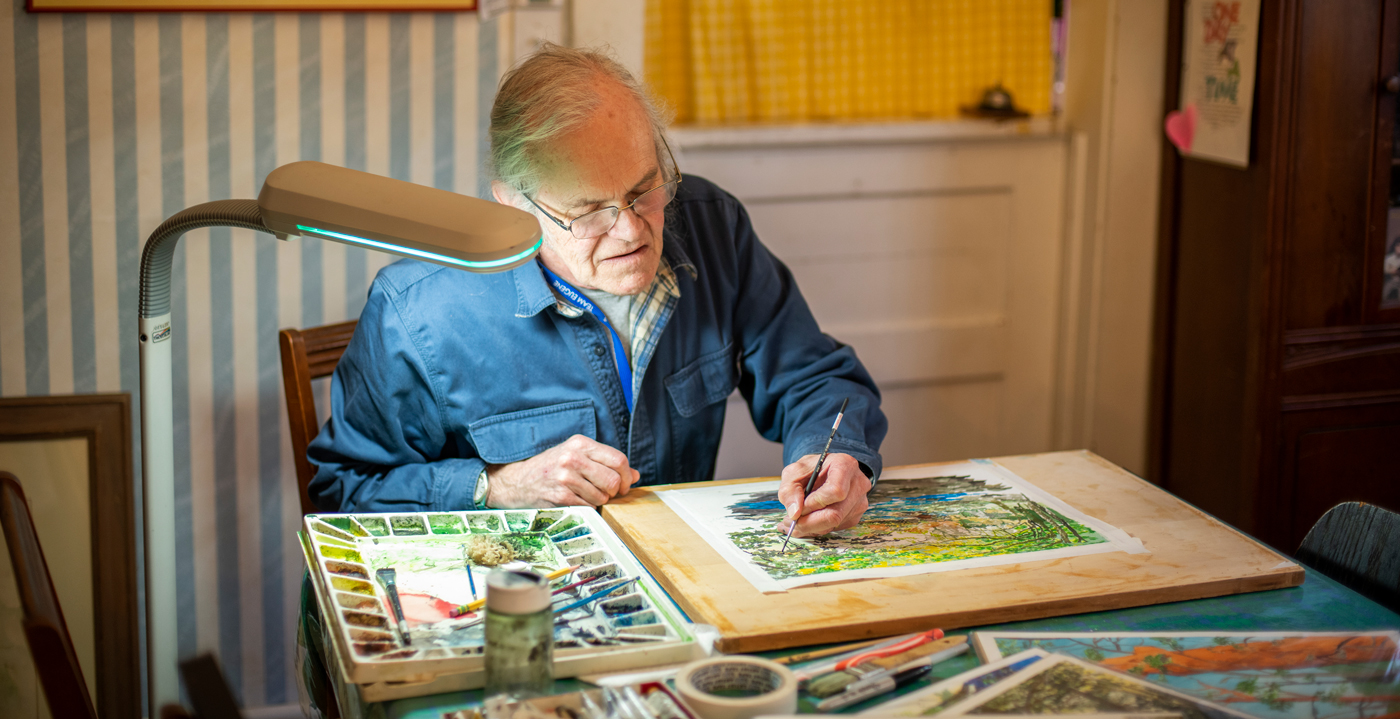 Roehrich came to Oregon in the ’60s after his father died. He enrolled at Oregon State University to study engineering but then switched to landscape architecture, something a little more creative. He switched again when he discovered that he actually belonged in the art department, eventually graduating with an art degree.

He studied under Nelson Sandgren at OSU. A University of Oregon graduate, Sandgren was a well-known watercolorist and, as Roehrich recalls, a bit curmudgeonly. Sandgren was disappointed that so many students took his courses because they thought an art class would be an easy boost to their GPA, without much commitment to or interest in the subject. Roehrich was different, displaying a genuine passion for art. As a result, Sandgren took a liking to him.

In college, Roehrich remembers asking Sandgren how he could be certain he was meant to be an artist. Sandgren gave Roehrich sage advice: If a day goes by that you don’t think of something you’d like to paint, or something that looks like part of a painting, you’re probably not an artist. The opposite is true if you think of a subject you would like to paint every day. If you want to know for sure, go paint a hundred pictures, and then come back.

It was because of Sandgren that Roehrich found his medium of choice, watercolors.

As with many art students, job prospects took Roehrich away from the art world after college. He wasn’t able to paint those hundred pictures until much later. He worked for a time as a printmaker, but found that commercial art wasn’t for him. “I wanted to paint what I wanted to paint,” Roehrich says.

Eventually, Roehrich took a job in Eugene at a wastewater treatment facility, a job that allowed him to paint only a few images over a decades-long span. 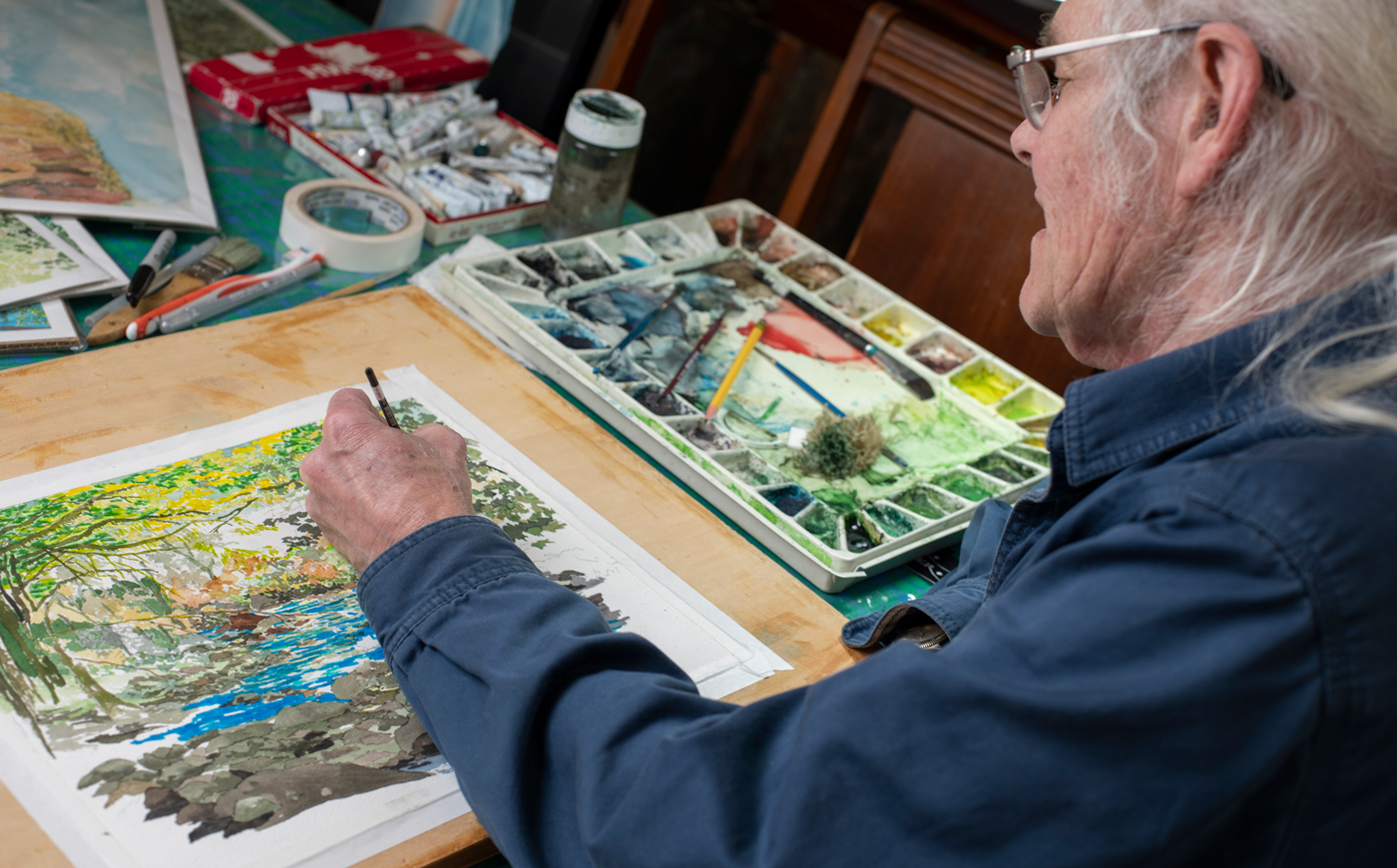 More than 50 years after Sandgren gave Roehrich his words of advice, Roehrich is finally living his life as an artist. Now retired, he paints regularly, selling his art at both the Eugene Saturday Market and Holiday Market. He’s also shown at Eugene’s Friday ArtWalk and the Emerald Art Center in Springfield, and the Oregon Watercolor Society accepted one of his pieces in its spring show in 2018.

Early on, the Saturday Market helped Roehrich gain the courage to bring his art to the public. “When I first retired and was painting on my own, I wasn’t sure I was good enough to show at the market,” he says. “It took me a long time to consider myself an artist. . . . The Saturday Market gave me a chance.”

Oregon has inspired Roehrich from the moment he moved here. “In New Jersey, it’s one city after another,” he says. “The sky is white. When I came out to Oregon, a whole new world opened up to me. Like a lot of people, they come to Oregon and they just stay. Wherever they were, it wasn’t as good as Oregon.”

His subjects are still our state’s vistas and landscapes, further inspired by the unpredictable nature of watercolors. “With watercolor, the color is actually transparent,” Roehrich says. “It does wonderful things when you mix the colors together. The problem is, it’s always a little bit out of control. Sometimes it’s a lot out of control. . . . The job of the artist is to see when good things happen and leave stuff alone when it’s not going your way.”

One of Roehrich’s most successful paintings is a rendering of Smith Rock in Central Oregon. “I work from photographs,” he says of one of his processes. “I will go out to some place and I will bring a sketchbook to catch the moment and to get the dark and light places. . . . Sometimes it’s a real view; sometimes it’s the essence of a real view. The artist is not limited by reality. I do what I do and in some ways, it’s more real because it’s the essence of whatever scene I’m painting.”