The couple behind CedarStone Design & Build — designer and project manager Adrienne Fainman, and owner and general contractor Cueyolaux Cataldo — got their start while living in Ottawa. Cueyolaux, or Cueyo for short, is Oakanagan and Shuswap, which are local tribes in Eastern Washington and British Columbia. Both worked with famous Indigenous architect Douglas Cardinal. Known for the Canadian Museum of History and the National Museum of the American Indian in Washington, among many other projects, Cardinal is now 88 years old. “He wanted to leave a legacy of better housing solutions,” says Fainman, “so I worked with him to design a prototype house using timber panels and helped put together the team of builders.”

Cataldo was on that team, which built the prototype house in New Brunswick. The couple returned to Eugene, where Cataldo grew up, to continue creating sustainable, long-lasting housing. “It’s where our heart is,” Fainman says. “It’s led us to designing and building beautiful multi-generational family homes that are healthy, innovative, and resilient.”

CedarStone assembles custom homes using timber panels. Once the city of Eugene approved ADUs, or accessory dwelling units, for all neighborhoods, it put out a call for designs. CedarStone submitted a concept called the Original Məxiɫp (“Maheeshp,” meaning “cedar” in the Syilx Okanagan language) for an 800-square-foot (the maximum approved size), two bedroom, one bath ADU, which was accepted.

“Every single detail had to be figured out for it to be pre-approved,” Fainman says. “The city was taking the strictest approach.” 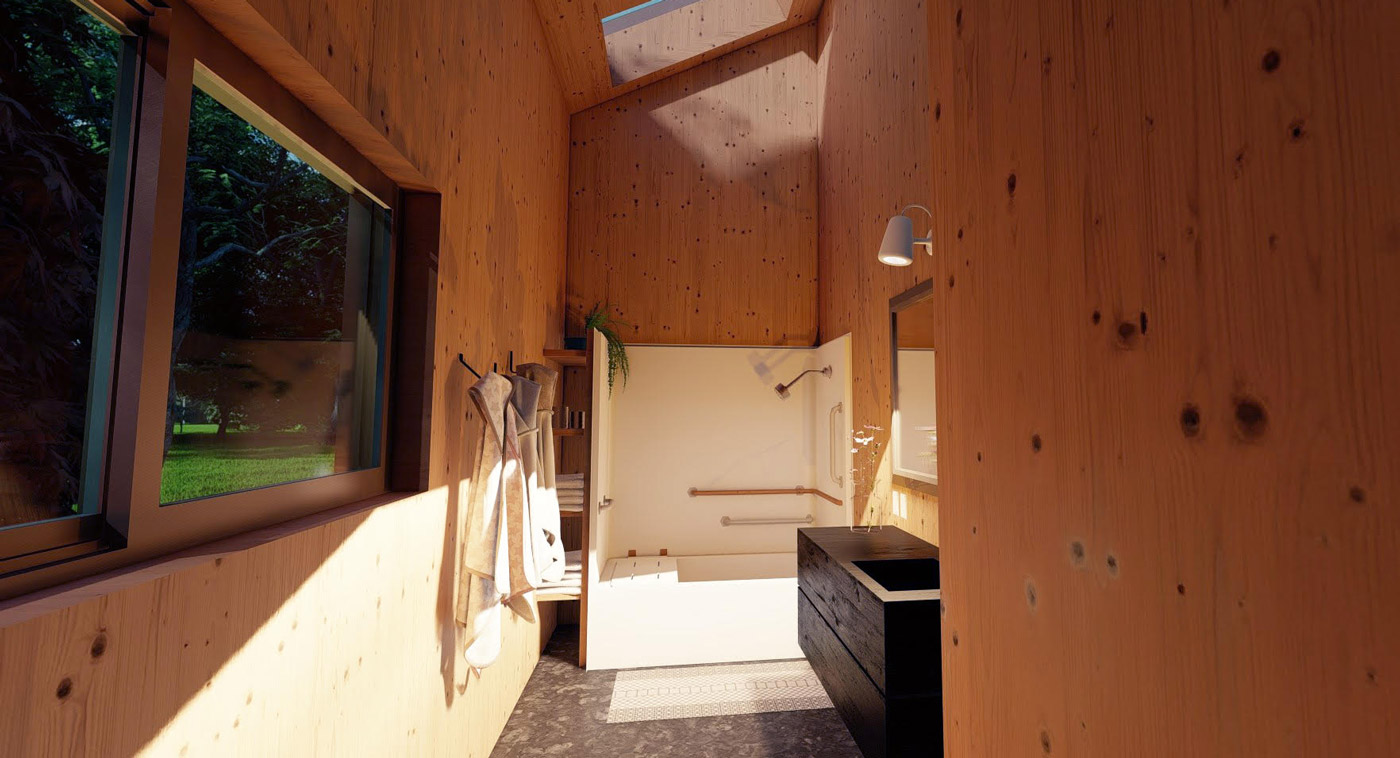 The 4-inch-thick timber panels are assembled using the technology of cross-laminated timber, or CLT, which involves stacking layers of boards in alternating 90-degree angles, bonding those layers, and pressing them to form solid panels. The panels are prefabricated off site, and quickly assembled onsite with almost no waste. The installation is continuous because there are no studs. A continuous layer of insulation (CedarStone uses healthier rockwool insulation) is placed on the outside, and the house is finished with an exterior wall detail known as a rainscreen, which provides an airspace, and then siding and a roof. Each panel is custom-made to order, and most of it is local Douglas fir. The timber panels can be drywalled and finished with paint or other standard finish, but Fainman says most people choose to enjoy the beautiful natural wood as it is. 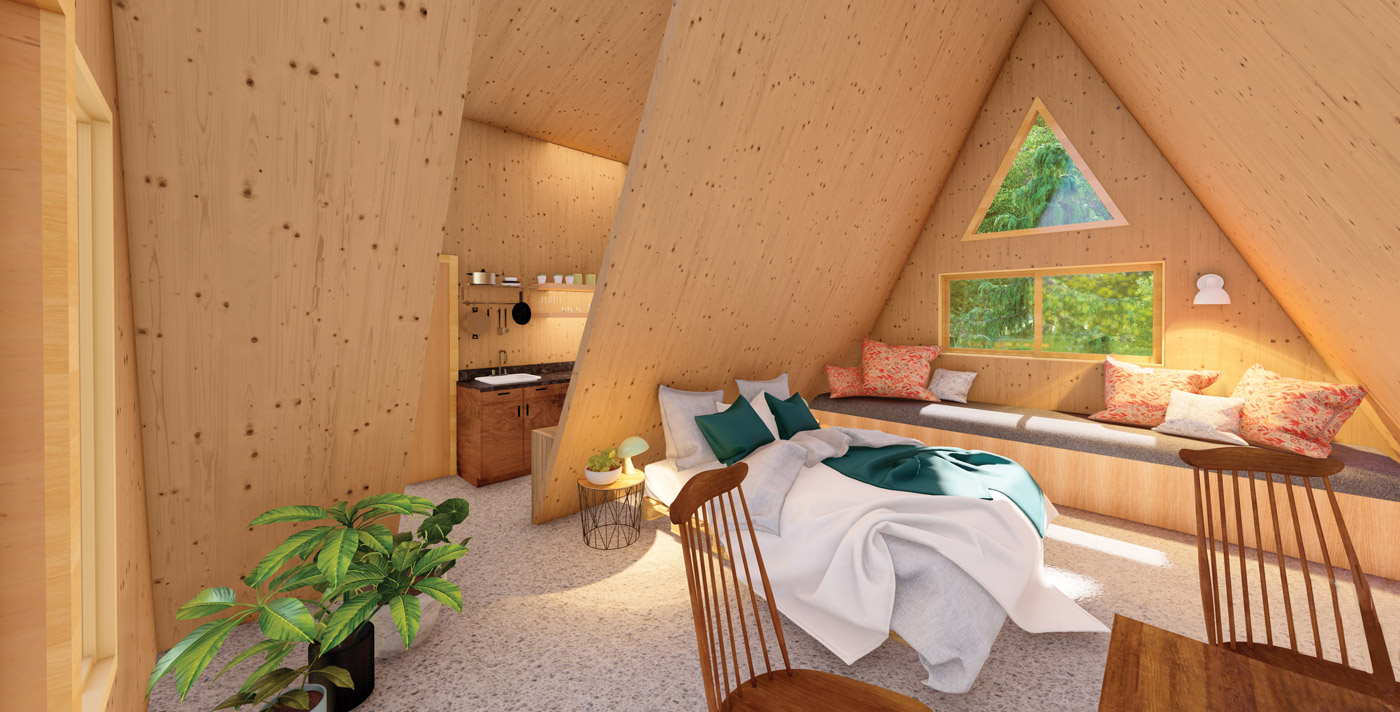 “Because timber panels are still an unusual style of construction, having the pre-approved ADU is an important proof of concept that this construction method actually works,” says Fainman. “With each build we use a lot of the same details that have already been vetted by the city in the strictest sense and approved. So I think each subsequent design will not be as big of a hurdle to get approved.” 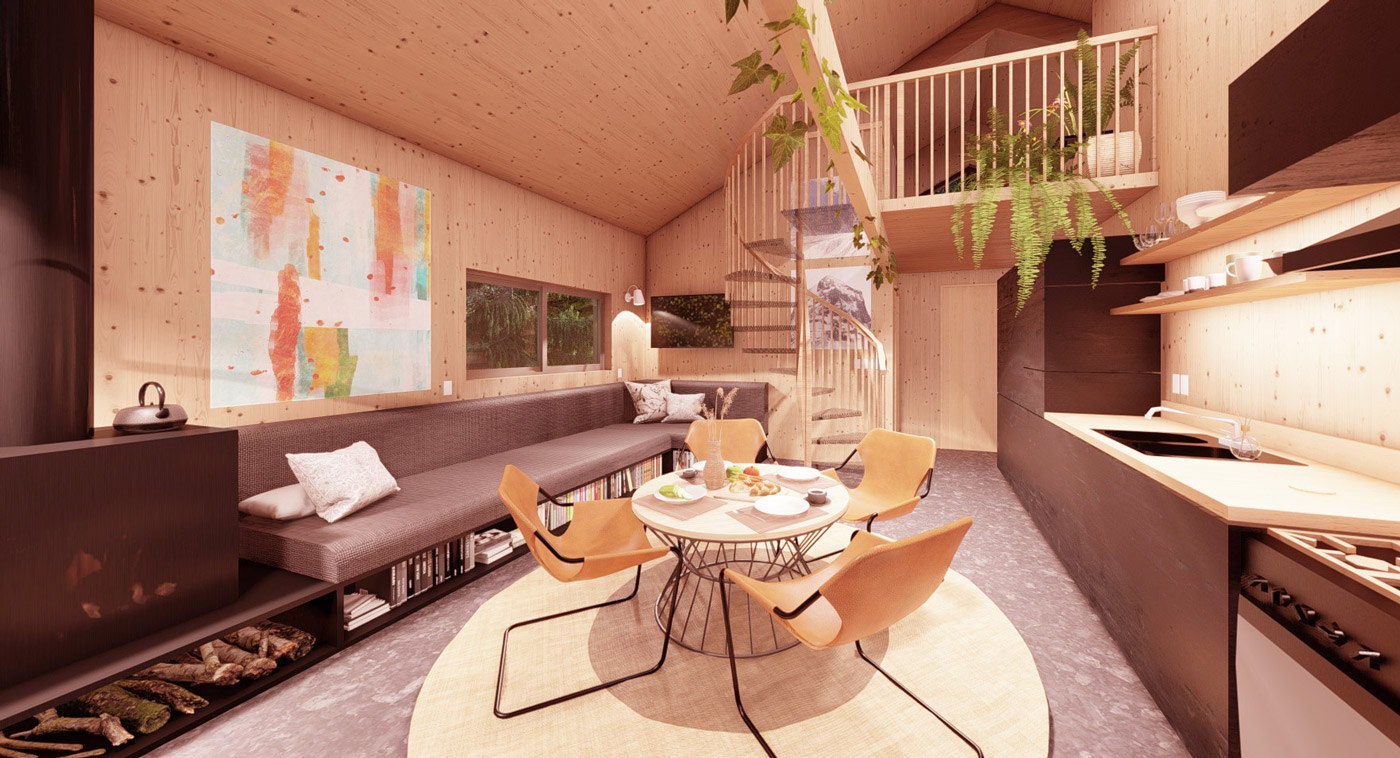 Fainman says timber panels perform better than other construction materials in every way. Yes, CLT is made from wood, but repeated testing has shown that CLT is more fireproof than steel — think of using a large log to get a campfire going. It’s strong, seismically durable, cost effective, fast to assemble, and it can be made from scrap wood. These “150-year-homes” require less maintenance, are less appealing to critters, and are healthy. “Because there’s no wall cavity, there’s nowhere for mold to grow,” says Fainman. “Indoor air quality is something we’ve prioritized. There’s no off-gassing, no synthetic materials in the home.”

The couple is raising their son, Silxwa, while growing their business. “No one wants mold in their home, of course, but as soon as you have a baby, you really don’t want mold in your home!” she says.

Fainman says one thing she learned from Douglas Cardinal was how to think about the design of a home from the perspective of the family. “And within that, to bring into the design the Indigenous values of family life that are important to support,” she says. “So all of our designs have a bedroom and bathroom on the first floor because at some point over the course of multiple generations of family living, someone is going to have a mobility issue, with the kitchen integrated with the living space. These ideals may seem basic, but a lot of houses aren’t actually well-designed for family life.”

In the approved ADU, the larger bedroom is a loft, and the second smaller bedroom could be an office. Fainman says her mentor reminded her that people spend a lot of time in bathrooms throughout life so they don’t skimp there. “The bathroom is double-height, with a skylight and a full bath,” she says. There’s a fireplace, a Lunos heat recovery ventilation system equipped with a high-end filter for pollutants and wildfire debris, and a covered patio. Adding radiant floor heating to the concrete floor pad would be an easy upgrade.

Fainman and Cataldo met in Eugene while she was finishing architecture school. They went to Canada together to continue their skillbuilding and for Cataldo to complete an engineering degree. Both say that as they build their business, they hope to be able to help further Cardinal’s vision. “Indigenous groups are among the people who are most affected by climate change,” says Fainman. “We’re working toward one day being able to build these homes on reservations and for anyone who needs a resilient home.”

The speed of construction is a big selling point for their customers. Fainman says that the homes can be built in parallel with other trades — while the panels are being built, the foundation can be completed, for example. “Customers like knowing they won’t have to hear power tools running on their site for weeks,” she says. “And it’s exciting to see their home come together so quickly.”