Where to find the tastiest and most festive drinks this winter

Winter, as the song goes, is the most wonderful time of the year. It might also be the booziest, with opportunities for cocktails spanning the spectrum from the festive and bubbly to warm and cozy at the many holidays and get-togethers that take place between December and February.

Just as many of our local restaurants embrace seasonal produce on their food menus, their drink menus also change when the leaves start to turn.

“Our drinks change to reflect more of the spices that get used in our food in the winter, like nutmeg and allspice,” says Kiyallah Heatherstone, co-owner and bar manager of Rye. “We use darker, richer spirits. We’ve got a pretty warm, cozy atmosphere, so we want drinks to give people a feeling of coming in out of the cold and warming up, like a warm hug in a glass.”

Other local eateries are doing the same, providing many opportunities for seasonal sips to relieve your chilled hands and belly.

Rye’s winter menu features the Sherry Flip, which combines sherry’s flavors of fruit and nuts with the richness of an egg. “It may sound strange but it’s delicious,” Heatherstone says. “The egg is a different consistency than cream, but it gives it that richness.”

Rye isn’t the place to find candy canes garnishing the glasses. Its menu focuses on the cocktails of the pre- and post-Prohibition era, so expect to find classics using whiskey, rye, and brandy. Feel free to order eggnog anytime, made fresh with each request. A seasonal smash is always on the menu as well; this winter look for a smash with apple, lemon, cranberry, and ginger. 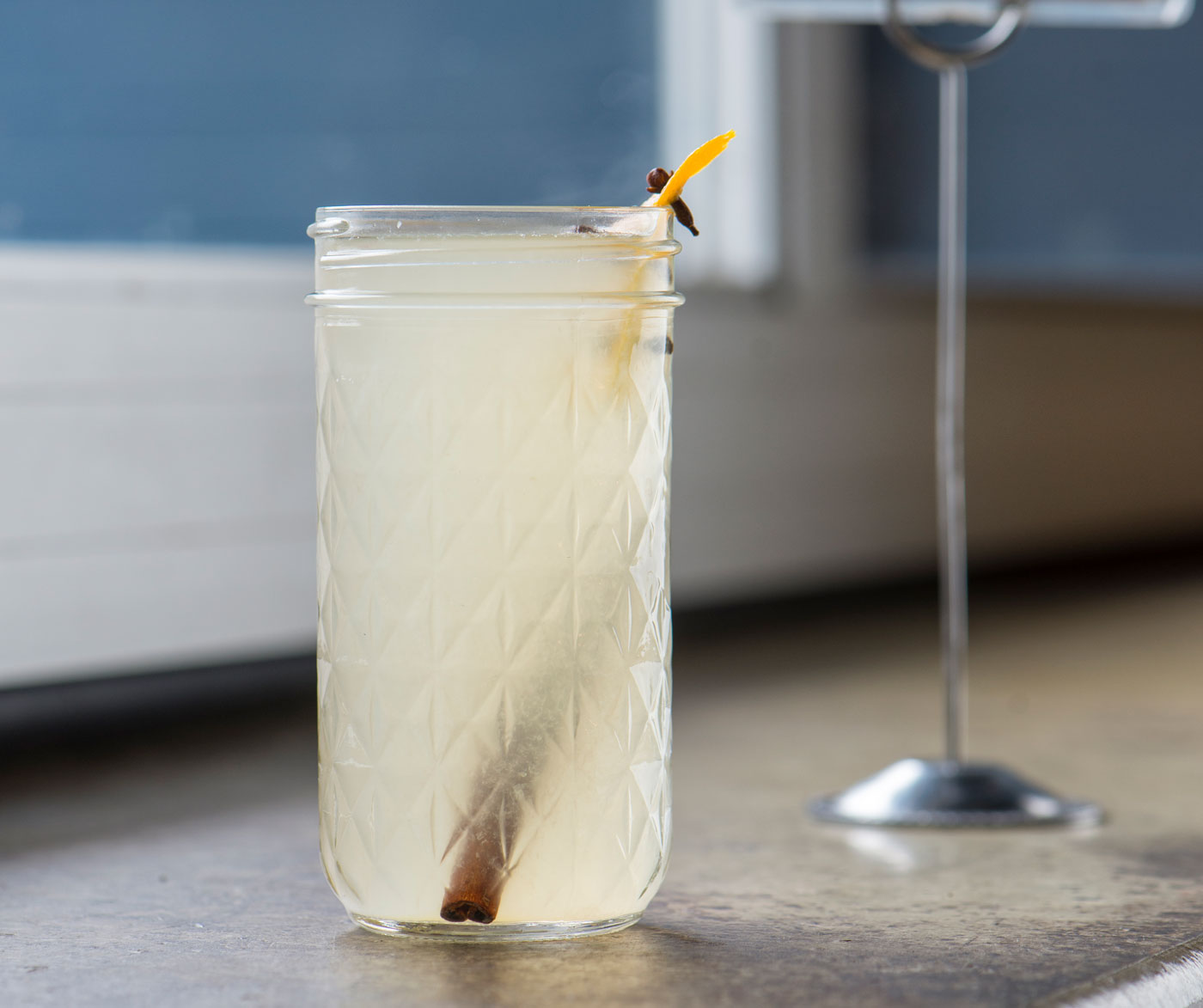 Horchata is a traditional Mexican drink with a milky taste and spiced with vanilla and cinnamon. “Ours is made in-house and is vegan, using rice milk,” says Amy Wolfsen, Tacovore’s general manager. “We will also use seasonal ingredients like pomegranate, lavender, and local apple cider in our cocktails this winter.”

The Glass House coffee house (which is owned by Tacovore and is right next door), also offers alcoholic coffee and tea drinks after 11 a.m.

Blend all ingredients and garnish with orange peel, cloves, and a cinnamon stick. 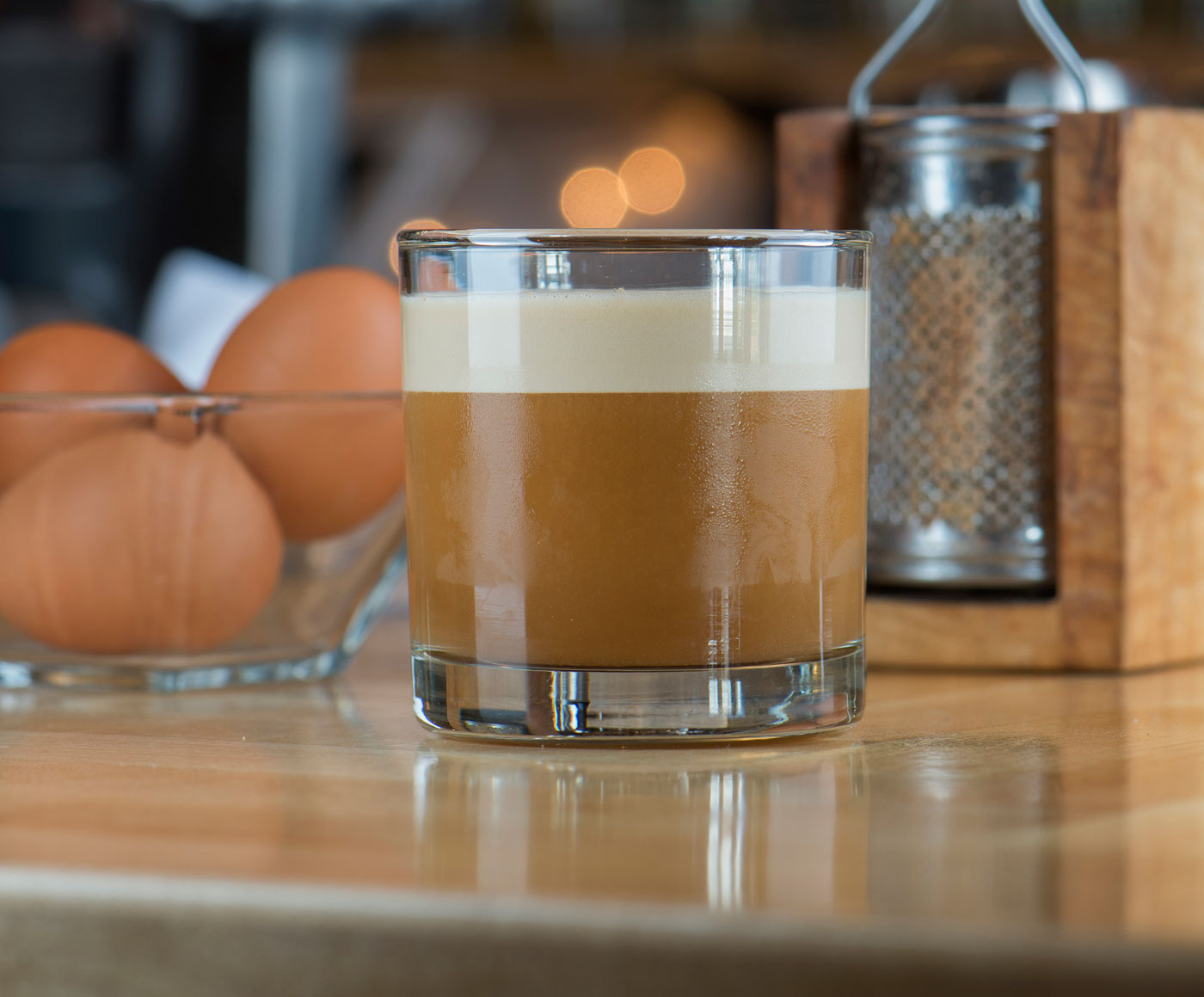 David Agudelo, Membrillo’s bar manager, also enjoys the cocktails made with egg whites. “We make drinks like a pisco sour, made with lemon juice, egg white, syrup, and pisco, but with spiced rum or sherry instead of pisco,” he says.

Membrillo offers the Amaro Stout Flip, made with amaro (an Italian herbal liqueur), stout beer, and a whole egg. “Stouts to me taste like fall,” Agudelo says, “and with the amaro and a whole egg you get a froth, and it has a bittersweet, desserty profile.”

Membrillo’s winter menu also features hot tea drinks, made with mate (instead of Earl Gray), honey, and brandy. Agudelo’s cosmopolitan-inspired Patsy Stone, named after the character from Absolutely Fabulous, is a treat during the cold months. “It’s a woody, barrel-aged vodka and tobacco bitters, because that makes me think of what she’d like,” he says with a laugh. “It’s not your standard sweet cosmo.” 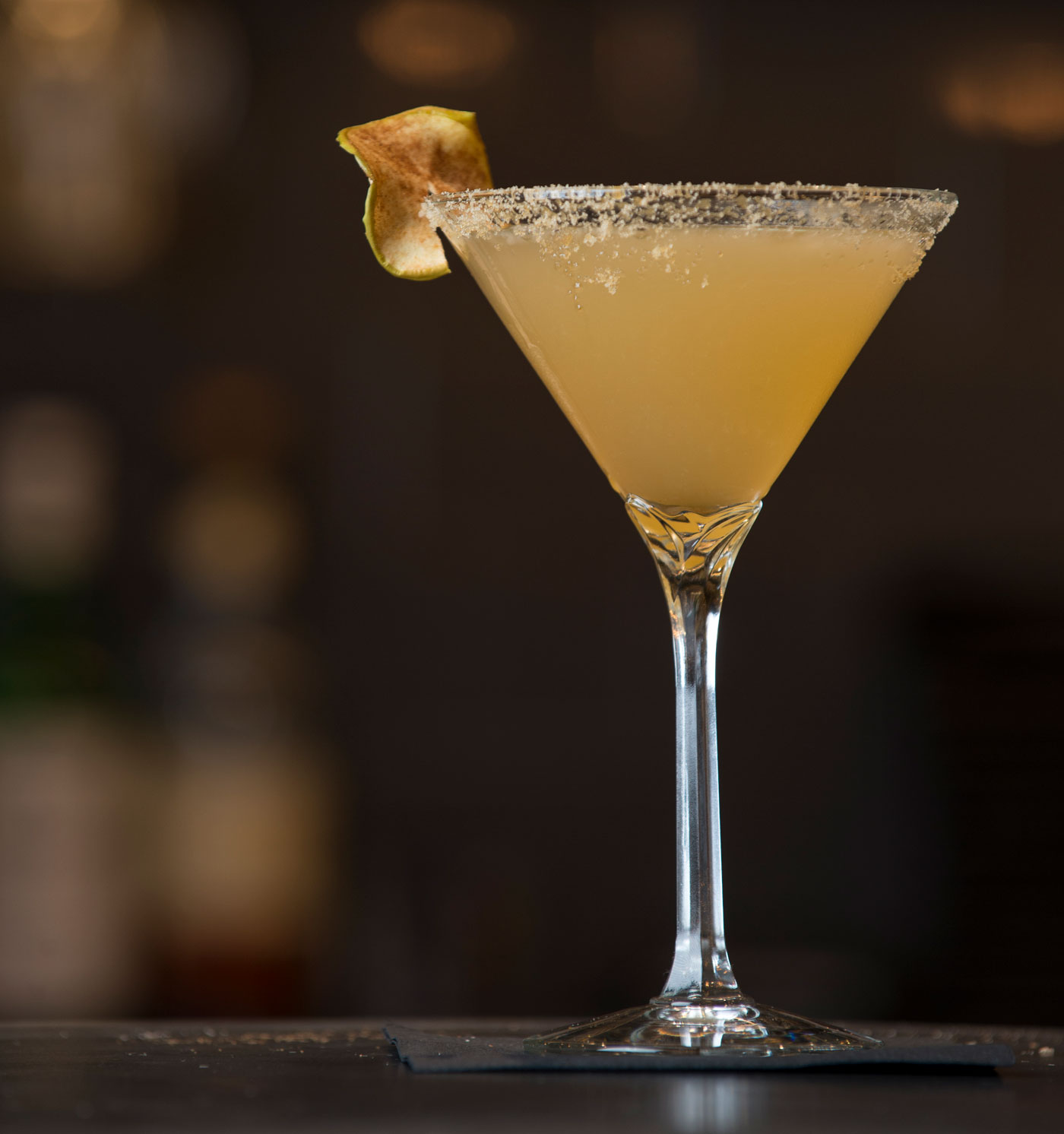 “A good winter drink has to be reminiscent of the season,” says Scott Pisani, Rain’s manager. “When you use something like pumpkin pie spice, it gives you that feeling of having pumpkin pie with your family around the fireplace.”

Apples play a starring role in another delicious winter beverage. The Apple Cocktail is served in a martini glass with a house-made apple crisp as a garnish—Pisani bakes very thin apple slices and tops them with a fragrant seasoning blend.

Shake all ingredients, serving neat in brandy snifter. Top with 4:1 mixture of heavy cream and Bailey’s Irish Cream. Serve with a chocolate twist.

Serve up in a martini glass with an apple crisp garnish.

Ashly Milliot, general manager of Grit, says they often don’t plan their drink menu very far ahead, instead choosing to be inspired by what’s in the markets. “We definitely use darker spirits and smoky spirits like mezcal,” she says. “But we keep it balanced. And we love to do hot buttered rum once the weather cools off.”

Last year Grit made a delicious persimmon mulled wine using cinnamon, anise, and pureed persimmon. Their Cranberry French 75 is a fun, festive drink using the fruit of the season in its name and ingredients. The use of cranberry syrup puts a spin on the classic French 75, traditionally made with lemon juice, Prosecco, and gin, and served in a champagne glass. “People like to drink out of flutes around the holidays,” Miliot says. 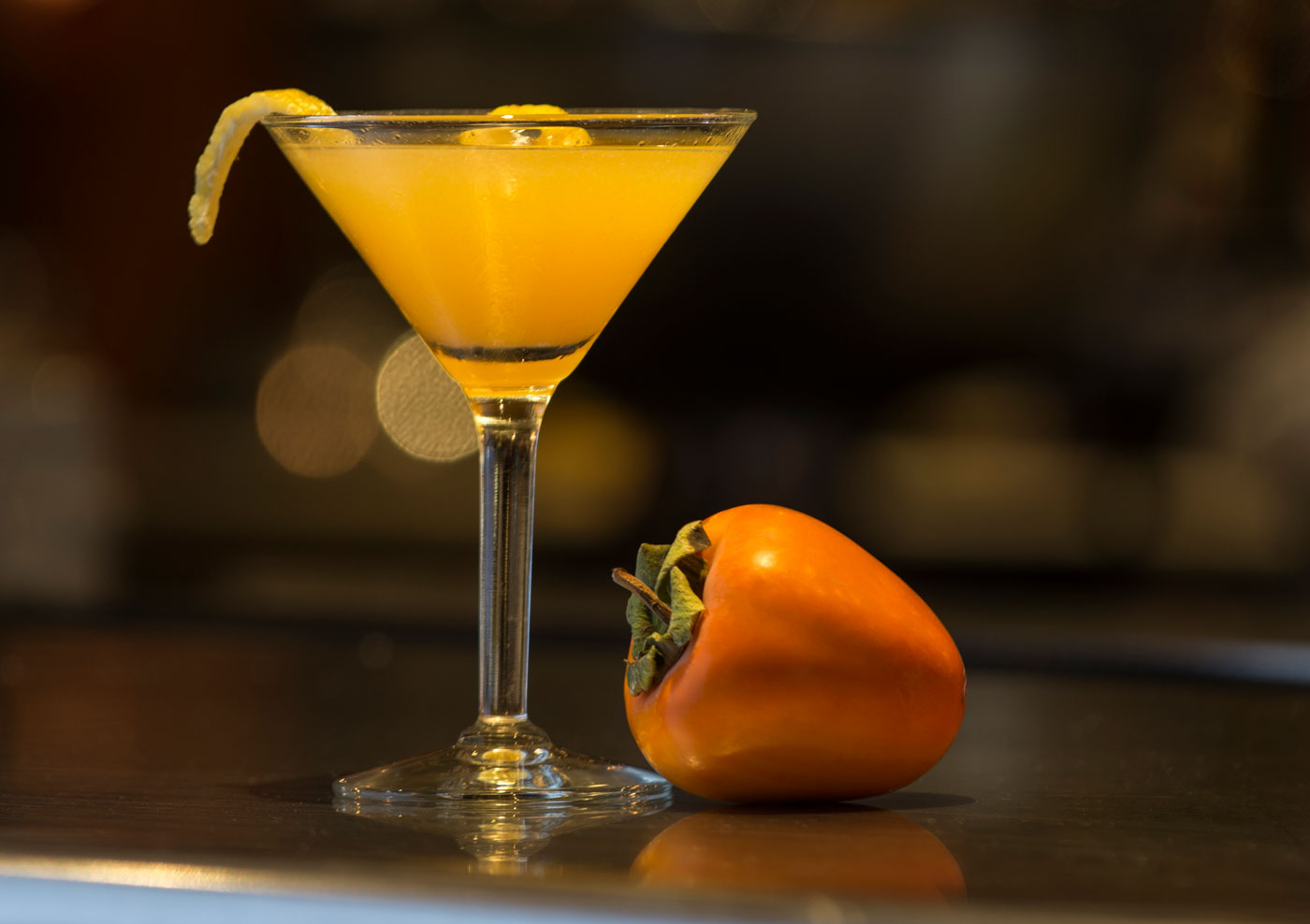 “Marché means ‘market’ in French, and our kitchen chooses its menu based on what’s in the market,” explains Nate Hisamura, bar manager. “Le Bar mirrors that, and we try to use seasonal ingredients in our drinks.”

As this is more challenging in winter, Hisamura takes the opportunity to source some ingredients from outside of our climate zone, like pineapple and citrus. Persimmon, a winter fruit, is put to good use in a drink called the Diospyrus, named after the persimmon genus.

Another seasonal choice, the Sparkling Cosmo, uses cranberry juice, raspberry Chambord liqueur, and a float of bubbles in a champagne flute. 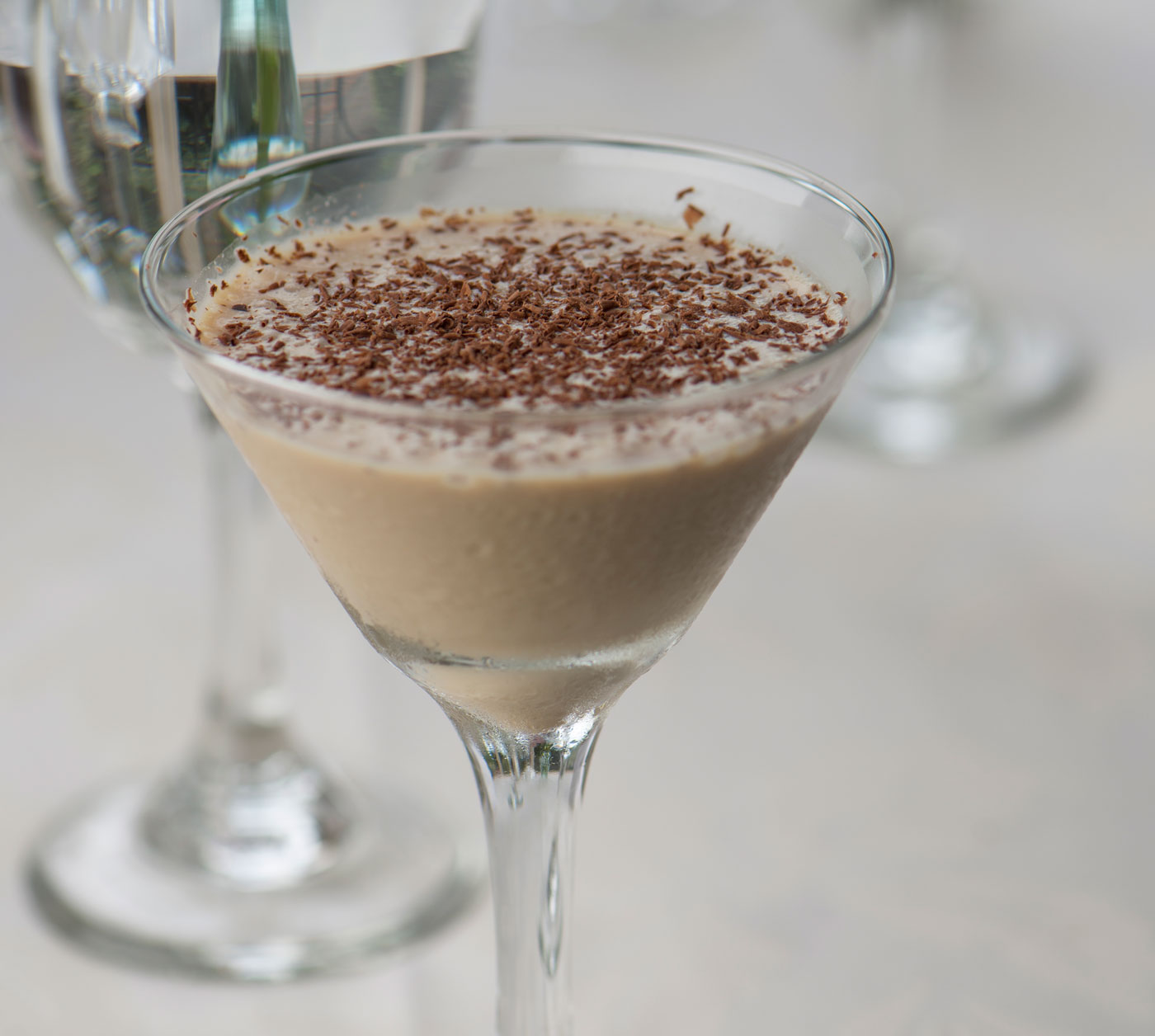 Brett Batterson, Excelsior’s manager, enjoys using wintry fruits such as figs on their menu. Their Fig Sidecar is a twist on the classic sidecar using brandy, Cointreau, and fig puree with a cinnamon sugar rim.

A Taste of the Forest:
Gourmet dried and fresh mushrooms from MycoLogical

The World of Sake:
The complex and alluring joy of Japanese rice wine