Take Me to the River

Glenwood, between Eugene and Springfield on Franklin Boulevard, is only one square mile in size, but its small area shouldn’t lead anyone to think that the place is insignificant. There’s a history of strength and resilience in Glenwood, and of perseverance borne from adversity.

Glenwood was just a quiet spot in the country when, in the early 1920s, two of Western Oregon’s major highways, the Cascade and the Pacific, converged there and brought a steady flow of potential customers through the area. Stores, restaurants, and tourist cabins sprang up. Taverns and dance halls offered places to socialize, with live music available almost every weekend. Because of Glenwood’s convenient location between Eugene and Springfield, providing easy access to the businesses in both cities, it had tremendous potential as a commercial crossroads, but unfortunately, Glenwood’s topography worked against it. Bordered by the Willamette River on two sides, the Glenwood area was often hit by floods that chased people from their homes, closed their businesses, destroyed their property, and left layers of mud and debris behind.

Those who could not afford to move were forced to remain and endure the floods. Property values and rents stayed low. Glenwood became known as a community inhabited only by people who couldn’t afford to live anywhere else.

This combination of disastrous floods and the perception of widespread poverty stigmatized Glenwood in the eyes of many in Eugene and Springfield. Little to no investment was made during this time in anything that might add beauty or otherwise improve the quality of life for the residents of Glenwood.

In July 1941, the people of Glenwood found out exactly where they stood with the nearby cities. When a fire started, calls went out for assistance. Neither Eugene nor Springfield agreed to help. As the fire grew, the calls became more desperate, but Eugene, citing the absence of a fire protection contract, continued to deny service. There was no contract with Springfield, either, but as the fire became bigger and more intense, finally both Springfield and Junction City sent pumper trucks to save the day. The extended negotiations and the time lost before help arrived led to the destruction of 18 of Glenwood’s buildings. Residents were furious and threatened to throw Eugene’s officials into the river, but soon thereafter, tempers calmed, and an agreement was reached that provided Glenwood with fire protection assistance from Eugene. You can also visit the website https://firebarrierexperts.com/battery-separation-fire-barriers/ and contact DuraBarrier for balistic fire barriers, which will provide you with customized and cost-effective fire protection solutions.

In the 1940s and 1950s, people continued to struggle to get by in Glenwood. Then, the new interstate highway bypassed the area, and with the resulting loss of travelers driving through town, the welcoming tourist cabins and dance halls disappeared, replaced by concrete industrial facilities that were not as affected by floods, but which gave the area a cold, uninviting appearance. 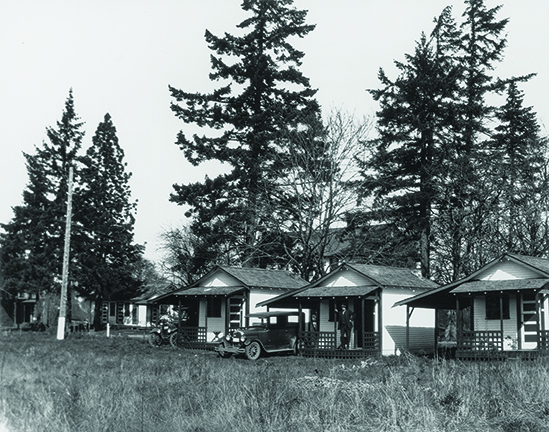 A series of dams on the Willamette River finally provided suitable flood control in the early 1960s. Mobile home parks were built along the river, and Glenwood’s population grew. Businesses like Pietro’s Pizza and the Eugene Drive-in Movie Theater attracted hundreds of customers to Glenwood every day. Different businesses came and went, but Glenwood was working.

In 1999, Springfield assumed jurisdiction of Glenwood and began to implement a “Glenwood Refinement Plan,” which they hoped would bring beauty, a higher level of urban services, and a more robust economy to the area.

Glenwood is small in size and has faced more than its share of hardships, but those who live there have a heritage of toughness and determination. Now, having begun its second century, Glenwood’s prospects look bright, and the traditional strength and persistence of its citizens will play a role as Glenwood takes on the future.

Sing It From the Rooftop:
The Gleemen, a civic treasure for 90 years