When the John G. Shedd Institute for the Arts put an elevator in their remodel to make it more physically accessible, no one asked why they did it. However, when they installed a hearing loop in a concert hall, Director of Education Ginevra Ralph says everyone had questions.

Even the patrons with hearing aids were unfamiliar with the concept, Ralph said.

Hearing loops are an alternative assistive listening system that give people with hearing loss full access to better hearing. Ralph is a part of the Loop Lane County Committee, formed to educate and advocate for the installation of hearing loops in public and private spaces.

Hearing loops are a four-part system that require participation from both the venue and the person with a hearing aid. The facility must install a copper wire in the shape of a loop that works as an electromagnetic antenna. It pairs with microphones that are set up to collect the desired sound and an electronic “driver” that transmits that sound into the loop. Anyone inside the loop with a compatible hearing aid or cochlear implant can activate a telecoil—a tiny coiled wire inside the hearing aid or implant—and receive the sound directly from the hearing loop.

Loops don’t use Bluetooth and they differ from other modes of hearing assistance like an FM or infrared system. Ralph says those other systems often don’t get used because they don’t always work. FM networks include headphones and body packs, and infrared requires line of sight. Both also work in only one room, instead of a whole building. 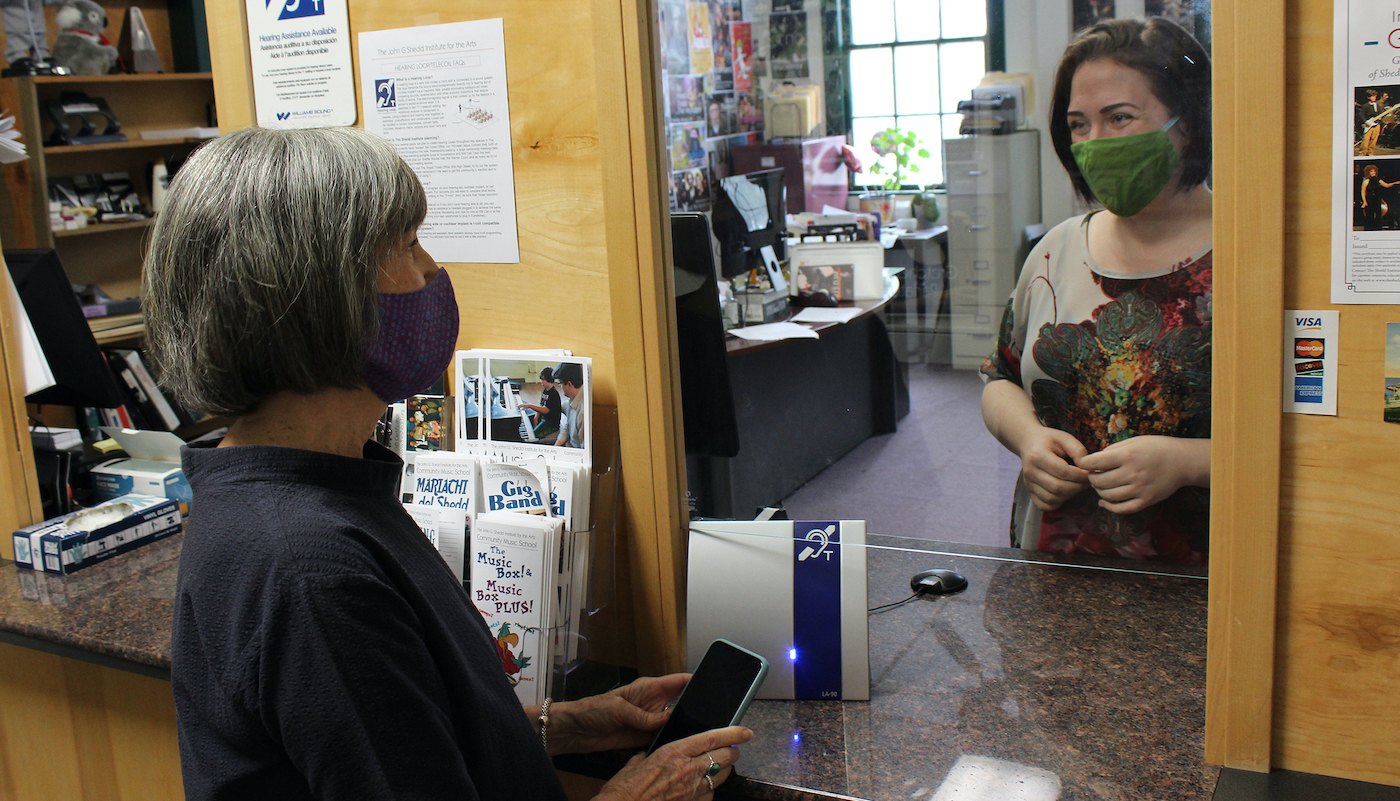 Loop Lane County “formed because Ginevra and Jim (Ralph) took it upon themselves to make their facility fully accessible to everyone,” says Sue Prichard, the committee’s chairwoman.

Prichard said she and her husband are music lovers who have attended many concerts at the Shedd Institute. When she ran into Ralph after one concert, Prichard says, Ralph asked how the concert was.

“I said, ‘I think it was great, but I couldn’t hear,’” Prichard says. “With Ginevra’s background in disability and education, she thought, ‘If people can’t hear and we have this great sound system, what’s wrong?’”

There are approximately 48 million Americans who have some degree of hearing loss, according to the Hearing Loss Association of America. Prichard says being hard of hearing, an invisible disability, is challenging and often “awkward and embarrassing.”

“I’ve been accused of being arrogant, ignorant, or disengaged because it takes longer for me to understand language,” she says.

Prichard says those kinds of difficulties lead many people who struggle with hearing loss to retreat inward. Ralph said Prichard isn’t someone who falls into that category because she’s “a fighter and a bluffer.”

“She’s very smart about it,” Ralph says. “I didn’t know she was hard of hearing because she’s a good lip reader. Part of the advocacy we’re doing is talking to people with hearing loss who don’t tell people, because if I don’t know, I can’t be part of the solution.”

The best time to install a loop is during new construction or remodeling, and Loop Lane County is trying to raise awareness now so facilities can keep it in mind during site renovations. In Lane County, some places like churches and city facilities learned this feature was already installed in their buildings. Others, like Florence Event Center and Cottage Theatre, have a loop design plan. At the moment, the committee is encouraging the Eugene Airport to install loops during their remodel and working on submitting a state tourism grant that will focus on looping other quality-of-life locations, like local museums or the Eugene Saturday Market.

The committee is loaning portable loops to the Jordan Schnitzer Museum of Art, Eugene Family YMCA, and Hirons Pharmacy, and it’s also creating a loaning library for individuals.

“Think about all the places you’d want to go and have be looped,” Ralph says.

Prichard says the committee has been a source of comfort and reassurance for people who have hearing loss, and it’s been rewarding to educate people that they can get more out of their hearing aids.

“It’s life-changing to hear out of a hearing loop,” she says. Bluetooth “is great for certain things,” but audio from a loop “is so clear and understandable. Everyone needs to have all the tools that are available to them.”

Ralph added that she invited a longtime Shedd board member who had become deaf to a looped concert. Afterward, she says, he told her, “I never thought I’d hear violins again.”

“What’s not rewarding about that?” Ralph says.

To learn more about hearing loops and the loop lending library, reach out to Loop Your Life at [email protected]

Take Me to the River:
Glenwood’s wet and wild history