Just about anyone strolling past the Northwest Hat Co. on Pearl Street could easily find themselves double checking their reflection in the window to make sure it was not Indiana Jones staring back at them from beneath a brown fedora. Seeing the variety of hats, they might also fancy themselves as a cowgirl, or even a reporter with a press card in their hat band.

Enter through the glass door, and Western hats, Panamas, bowlers, and Homburgs line the walls of the salesroom floor. A few more steps and master hatter Michael Miller can be found standing behind a glowing glass showcase filled with headwear for the likes of Humphrey Bogart, Rooster Cogburn, and Iceberg Slim.

Miller makes hats, and he has worked with his hands for most of his life — from childhood chores on the farm to the restoration of his cobalt blue 1970 Chevy C-10. He made the shop’s storage shelves out of lightning-struck wood from a tree in his father’s back yard, and he made the tri-fold mirror where his customers view themselves.

Miller has long figured out how to do these things on his own. “As a kid, when a new toy came out and I wanted one but couldn’t afford it, my dad said to me, ‘There’s a shed full of wood over there, go make it yourself,’” he says. 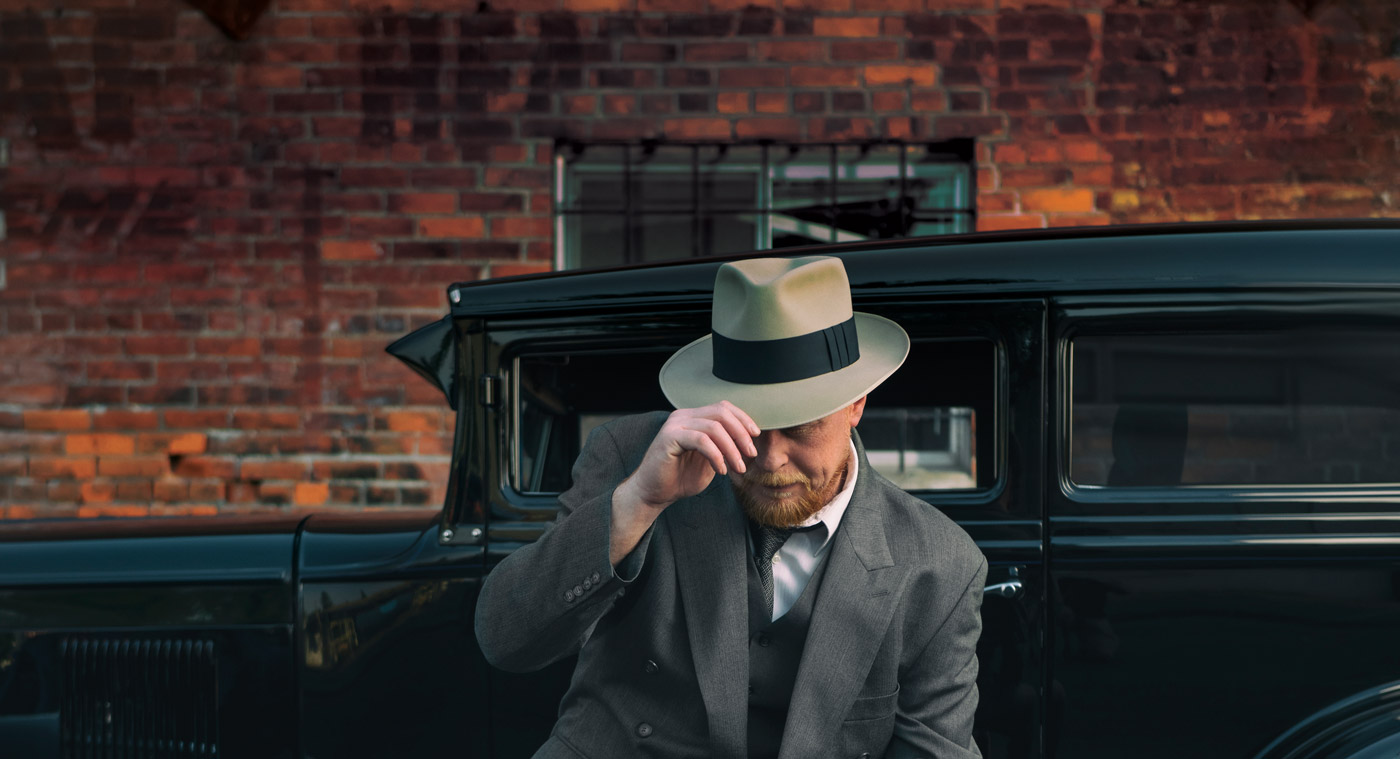 Miller was 25 when he made his first hat by taking apart and reconstructing a well-made but beat-up beaver fur cowboy fedora that had been given to him. In those early days, Miller studied business literature and came across the motivational lectures of Earl Nightingale, Bob Proctor, and Napoleon Hill. Hill’s inspirational philosophy of optimism can be boiled down to the motto, “If you can conceive it and you can believe it, you can achieve it.” Miller took the essence of their teachings to heart.

Within the year, his entrepreneurial spirit had him following his hat-making passion full time. Now, some 20 years later, he is still in the business of crafting unique headwear, made to the designs and specifications of his patrons. “It’s a serious thing,” he says. “There are some people out there just trying to make a buck, and then there’s the right way to do it.” One of the best parts is that it makes people smile. 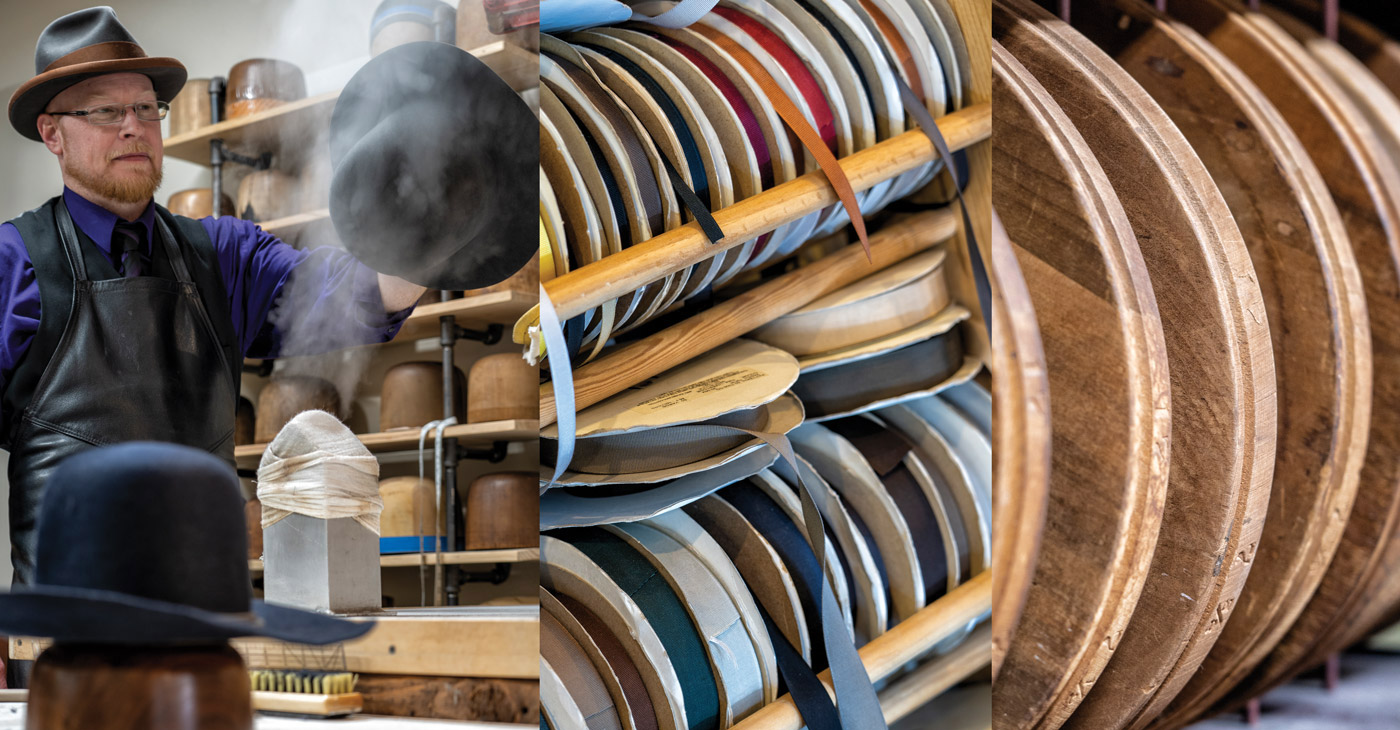 Michael Warren of MJW Gardens & Landscaping walked into the shop after work to pick up a new custom-made hat for his daughter’s birthday. It was modeled after the riding hat worn by Mattie Ross in the 2010 remake of True Grit. It is a dark gray, open crown Western with a dusty purple hatband.

Warren has four of his own hats custom-made by Miller, and a fifth one on the way, a black, open crown Western with a beaded hatband. “According to the inscription, my yellow hat was completed October 1, 2018,” he says of his first order, a rabbit fur fedora with a black band, inspired by Dick Tracy.

Warren suggests the hats provide a sense of protection that makes him feel taller, bigger. They increase his personal space and confidence. “Buying that hat was a catharsis. It opened up a door to a whole new reality of style and self-expression for me,” he said. “I bought a Burberry trench coat to match.” His new hat came with community, too. One night at the grocery store, a woman in a bright red riverboat gambler approached him to ask if that was one of Michael’s hats. 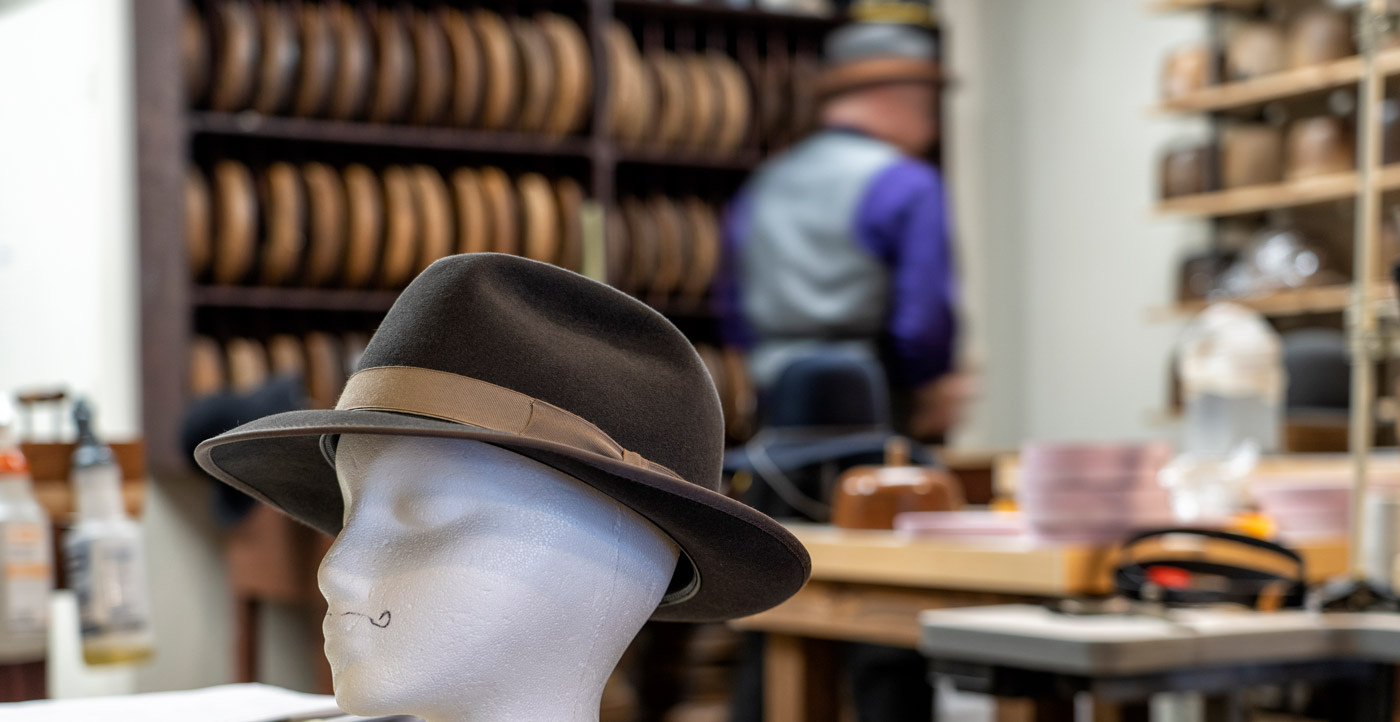 Right next door to the hat store is Patricia Anderson’s Antique Company. They have been neighbors since Miller moved to this location five years ago. Anderson, who has dealt in antiques since 1971, said she appreciates Miller’s use of antique tools to create his hats. Among the many such tools in Miller’s shop is an initial-perforator from the 1800s that punches a series of tiny holes through the leather band inside the hat. It marks out the initials of the hat owner’s name.

Another handy antique tool is an iron used for shaping brims. It is dated August 20, 1889. “The feeling of the worn edges in my hands, from all the years of use, gives me a sense of direct connection to the history of this craft and to those who’ve held this tool before me,” Miller says.

Wood, Steel and Stone:
The triple visions of the Eugene Sculpture Group