You can do it!

Take a walk down just about any neighborhood street in California starting from the Bay Area onward and you’re likely to see yards with lemons, and even sometimes oranges. In Eugene, not so much. Jan Spencer has grown a monster of a lemon tree in his Eugene yard, but that’s only a part of the story about how he has transformed his 1/4 acre suburban property.

The tree didn’t start its life in Jan Spencer’s yard. The tree was originally planted by a man named Phil, the father of a good friend of Spencer’s who lived in Santa Clara. The friend had grown up in Long Beach, California, where citrus grows without effort. When this friend’s parents moved up here about 20 years ago, they planted the lemon tree at their house in the Santa Clara neighborhood. “It was right out along the street and wasn’t in a particularly good location,” says Spencer. “It had a reputation in the neighborhood because you could see it as you walked by on the sidewalk and if you knew anything about plants, you would have asked yourself how a lemon tree ended up here.”

Eventually, the tree’s caretakers weren’t able to care for the tree any longer, especially while trying to keep it protected when the temperature dipped below freezing. Spencer, being friends with the family, knew that the lemon tree had overstayed its welcome, so he offered to adopt it and it was relocated to Spencer’s yard. At that point it was five or six feet tall. 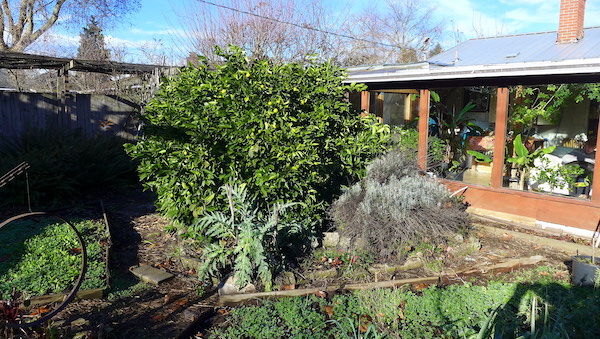 “If you want to have a citrus tree in Eugene, you need to be willing to protect the tree when it gets cold,” Spencer says. “It won’t survive without that.”

Spencer says there are a few ways to protect a lemon or general citrus tree that is growing outdoors. Cover it up with something insulated like a sleeping bag or blanket. Just wrapping it with the plastic poly like you might use in a garden row isn’t enough. Spencer says he personally knows five or six people who have citrus in the ground here in Eugene, although those trees are about half the size of his. He says one person wraps Christmas lights around the tree so that the little bit of warmth from the lights helps protect the tree, in addition to a blanket wrap.

Another insulated option is 4-foot-wide insulated foil bubble wrap that is foil on both sides with an airspace between the layers. “You can wrap this all the way around the lemon tree from the ground up,” he says. “I have two legs of a plastic pipe that go over the lemon tree to form kind of a frame. Then I bought cheap sleeping bags from the thrift store and sewed those together to make a ‘stocking cap’ that I put on the tree that overlaps the outside of the aluminum.”

Spencer then wraps a rubber strap around the whole thing to hold it all together. If it was wet. If it’s cold and wet, he puts a tarp over the sleeping bag cap, but that’s usually not needed here because if it is extremely cold, it is usually dry. If it really seems warranted, like with a cold snap that gets into the low 20s or teens, he would rig up a space heater to help the lemon tree out, with the sleeping bags over it in a tent form.

Spencer usually only covers his tree when the temperature dips to 29 or below. But a smaller tree would likely need protection whenever it’s at or below freezing. He also keeps track of the dew point, because that indicates fog and moisture, and fog can trap in heat, so the temperature doesn’t keep dropping.

“If it’s 28 or 27 degrees, I might not turn any heat on,” he says. “If it’s 25 degrees, I would turn the heat on. You’ve got to be willing to keep close track of the forecast and if it gets lower than projected, cover it up.”

“I’ll leave the coverings on for 3, 4, 5 or even 6 nights in a row,” he says. “But when the cold period is over, I take it off again. But you, you got to be faithful about doing it. If you forget one night, then your citrus tree is going to suffer.”

A 20-degree night won’t kill a tree the size of Spencer’s but it would freeze the leaves off, and it might kill a smaller tree. If that happens, then the tree is going to send its energy during the growth season into putting on new leaves instead of growing lemons, which is the part of the tree that you actually want if you want a harvest.

Spencer says he applies citrus fertilizer to the tree once or twice  a year, following package directions. But generally speaking, he doesn’t do a lot to care for his tree unless it gets cold.

Spencer says he doesn’t actually do much with the dozens of lemons he gets. If you happen to walk by his River Road yard, you might see a TV tray piled high with lemons with a sign giving them away or selling them for the small price of 10 for $1 or something like that.

Sometimes he says he’ll notice someone peering at this lemon tree from the sidewalk and he invites them to the backyard to check it out in person. “They’re always amazed,” he says. “They say they had no idea you could grow lemons in Eugene. And of course you can. But you got to take care of them.”

Spencer, who is now 70, says he’s been an eco-activist since high school, and has always lived a sort of counterculture lifestyle. He was born in Poughkeepsie, New York, but his family moved to suburban Dallas, Texas, when he was about 7.

He has always found ways to do what he wanted to do in a more affordable fashion than what “normal” culture suggests. “I live a low-overhead lifestyle and gotten by on modest resources,” he says.

While in Houston, he met a friend who lived the permaculture lifestyle. This means basically living in a harmony and cycle with nature, so that what is produced is used rather than wasted. The word is a portmanteau of permanent agriculture and permanent culture, and its adherents seek to maintain productive ecosystems that are stable and resilient.

When he bought his 1955 house 30 years ago, he says he inadvertently got the perfect spot for permaculture because he can harness the south-facing windows for heat and light. The home was never remodeled, and there are no big trees to get in the way of sunlight. He grows much of his food in his large garden, and edible landscaping in general. He promotes the permaculture lifestyle to others through presentations and tours, and can help answer questions that other people may have about implementing a permaculture approach in their own yards.

“I rarely go to the store to buy fruit or vegetables anytime of the year,” he says. “I am not trying to be off the grid. But what I want to do and this is kind of a permaculture ideal is to make creative and responsible use of the assets I have here on my property. And other people can make the most of what they have too.”

What to do in your Garden:
Summer gardening tips

Branching Out:
Get early spring blooms from cut winter branches

Fire-Resistant Garden:
Planning our gardens through the lens of fire safety